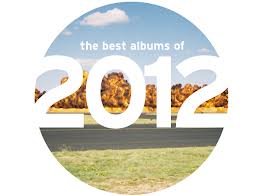 30. Various Artists – Mercyland: Hymns For The Rest Of Us

Phil Madeira’s session playing CV is such that when he comes
up with a great idea like this he can call on the likes Of Emmylou Harris, Buddy Miller and The Civil Wars to get him started. Great songs of faith and realism...

29. Emeli Sandé – Our Version Of Events

This girl was the voice of the Olympics and pretty much everywhere else in 2012. My girls all loved her and she snuck into my affections too.

The Death Cab For Cutie singer make aa solo debut. If I’d bought it earlier this could have been higher. Great songwriting and layered
harmonies. Sweet!

All over the television I took to them late. Remind me of Belfast’s Lowly Knights but more popped up.

Saw Rosie in concert at Calvin College in March. Wonderful. Consummate writer and she reaches deep into heart and soul.

Perhaps the law of diminishing returns is hitting The Killers’ output but still catchy and always a few nuggets of spiritual nourishment.

Peacock’s first song based record in a long time was no disappointment. Think Paul Simon rhythms and Eugene Peterson theology adding some deep southern blues and spirituals to the mix.

23. Julie Lee and The Baby- Daddies

My old work mate Julie with those gorgeous oldie tunes and
Gospelly songs and that great big voice.

Blue Nile mainman’s first solo album was good but not as good
as I had hoped. Still all the early morning calm and reflection of old just not as seminal.

East Belfast’s soul machine concocted his most satisfying work in a while. Attacks on the monetary injustices of the world and some everyday wisdom for living.

Dublin’s chauntese records a range of covers from Nick Cave to David Bowie to Radiohead tastefully produced by my old buddy Eanna Hickey. Their version of Snow Patrol’s Dark Roman Wine is gorgeous!

In his late 70s the guru that is Leonard Cohen still touches the heart and soul.