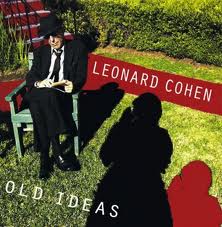 It doesn’t seem seven years since Leonard Cohen’s last album because the man has spent the middle years of his seventies up to his wrinkles in a whole lot of activity including critically acclaimed concert tours that produced a plethora of CDs and DVDs and a number 1 hit single via the dubious conduit of X Factor winner Alexandra Burke! The years between Dear Heather and Old Ideas have built Cohen’s status to a Zen guru presence. For weeks there has been anticipation about this new record not because the public
is imagining some reinvention at the age of 77 but more that he is the closest thing rock music has to a spiritual sage and we are waiting for the wisdom he has to share.

There is no disappointment for those looking for spiritual songs. As always even with his Zen Buddhist practice and Jewish faith doesn’t
stop some excursions into Christianity. On Amen he sings, “When the filth of the butcher/is washed in the blood of the lamb...” and on Show Me The Place, “Show me the place/Where the Word became a
man...”; Word has a capital letter and it is hard to get past John’s Gospel chapter 1 and verse 1. Prayers, penitential hymns and search for sacred insight is rampant on this collection of songs. Healing, mercy, solace, peace and justice are sought throughout.

As always Cohen’s life and songs are well balanced with darkness, desire and guilt but it could be that in some ways his aging has slowed down his ability to; “I’m tired of choosing desire/Been saved by a sweet fatigue” he sings on Crazy To Love You, written with his girlfriend Anjani. Cohen’s age does seem to hang over this collection of songs. I guess if it has been seven years since your last record and you realise that if it is seven years until your next
and that you’ll be 84 years old by then that you might be sensing your time running out. Mortality has been on the mind of Leonard’s good mate Robert Zimmerman in recent years, Paul Simon has been thinking Afterlife too! The opening song here is God speaking with Leonard and trying to direct is art. Perhaps God has seen the drawing of a naked woman on the CD and wants to change Cohen’s direction but he is certainly encouraging Cohen to share divine messages. The song is entitled Going Home and suggests that
Cohen is on his way there with no sorrow or burden; heaven
beckons!

Musically, it is as I said, nothing ground breaking. That would be sacrilegious! A few strings here and more importantly a few female vocals (check Come Healing for instance) there to give tone and shade to Leonard’s often little more than spoken husky whisper are
enough to set up these songs. Even the lyrics are so much simpler than say a Hallelujah or a Tower Of Song. All in all Cohen has come up with another mature bunch of reflections on the shades of light and darkness that spin around the human life. Another meditative reflection on the spiritual; serenity with potency. The gauntlet is thrown; 2012 you have eleven months to better this
one!