STOCKI'S ALBUMS OF 2012 - Chimes Of Freedom; The Songs Of Bob Dylan 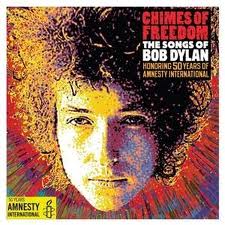 My friend Lesley loves Bob Dylan and hates cover versions of his songs. I, and I think most Bob fans, am less prejudiced, more liberal and tolerant. I think Dylan’s songs are so good that they gain something from being stretched and squeezed, push and pulled. Other shapes and arrangements can bring out the nuances of a catalogue of songs that is second to none. Well, here is a reshape fest. Seventy three, almost entirely previously unreleased, covers of Bob Dylan songs is an absolute treasure trove. This release, for the good cause of honouring fifty years of Amnesty International, is so vast across four CDs that it is almost impossible to review. So let me say at the outset that it is well worth the £15-20 you’ll have to pay for whatever version you choose. The vast amount of these songs are to be enjoyed, very few are to be left off a carefully programmed playlist and then there are a healthy number of gems that throw another hue on some classic Dylan!

The range of contributors is amazing in itself. There are the established and likely acts like Sting, Jackson Browne, Elvis Costello, Mark Knopfler and Bryan Ferry to name but a few. Then there are to me the more unknown fringe players like Flogging Molly, The Belle Brigade and The Airborne Toxic Event to name but three. Zee Avi, Oren Lavi and Xamina Sarinana give a world music contribution along with the established Angelique Kidjo. More surprising and maybe making my friend Lesley fear the worst are Natasha Bedingfield, Maroon 5, Adele and... wait for it Miley Cyrus!

Well, first things first... Miley nails it! Her southern drawl sneaks through a deeply felt version of You’re Gonna Make Me Lonesome When We Go; a suggestion that here is a career that could outlive the teen TV bubblegum. Bedingfield does a good version of Ring Them Bells too. Adele’s Make You Feel My Love is already hitting classic status and introducing the Zim to a whole new younger audience.

Sheer quality could be a subset playlist that you could press Jackson Browne’s Love Minus Zero/No Limits, Sting’s Girl From The North Country and Diana Krall’s Simple Twist of Fate, Joan Baez’s (it would have been wrong not to have included her) Seven Curses and Mark Knopfler’s celtic slant on Restless Farewell right into. Buckets Of Rain could have been written for Fistful Of Mercy as could Trying To Get To Heaven for Lucinda Williams.

Stretching and squeezing is at its best on the haunting melancholy of Cage The Elephant’s The Lonesome Death of Hattie Carroll, the menace of Rise Against’s Ballad of Hollis Brown, the drive of Gaslight Anthem’s Changing Of The Guard, the visceral defiance of Sinead O’Connor’s Property of Jesus and the almost electronica of Elvis Costello’s License To Kill. The old time string jig sound of The Carolina Chocolate Drops doing Political World and Flogging Molly’s Irish knees up of Times They Are-A Changing are surprising successes too!

It is hard to pick out a failure. Maybe some of the heavier rock versions don’t quite click but that might be my own subjective old man tastes! This is a not only an honour for Amnesty but the most lovely tribute to Bob Dylan too. Stick these songs on your mp3 player, press shuffle and marvel at the different voices, styles and hues; unless your name is Lesley you’ll love the vast majority of it!