Home Archives Profile Subscribe
4 CORNERS FESTIVAL - HOW IT ALL BEGAN
STOCKI SURMISES HIS LOSING 50lbs in 2012; The Physical Secret and Spiritual Key

STOCKI'S ALBUMS OF 2012 - Martyn Joseph; Songs For The Coming Home 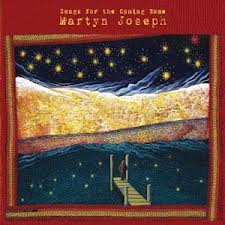 (two days until Stocki declares his Top 30 Records of 2012 and here is another contender...)

I can’t take my ears off Martyn Joseph. This is maybe his 30th record (studio/live/collaborations/eps) and since I boughtAn Aching And A Longing, his live acoustic album in 1989 which took his career on the journey he has treaded ever since, very few artists have kept my attention as well as this Cardiff Devil (Ice hockey reference and not confirmation that he is a Liberal Backslider!). As soon as Songs For The Coming Home starts playing on my iPod I am gripped, intrigued and utterly blessed by ten new songs. Many other artists that I have loved have lost my attention down two and a half decades but never Joseph. His longevity has me wondering why? Is it the voice that is strong, vulnerable, ragged, smooth, angry and loving all across every album and live show? Is it the songwriting that is always intelligent, poetic, provocative, prophetic and pastoral? Is it that, though his song craft has not moved far from a folk song template, his records have added subtle little shifts of grace notes as the piano here on Clara, the mid sixties Beatles’ brass on Beyond Us , the Springsteen-esque harmonica and the Gospel choir on Still A Lot Of Love Round Here? It has to be said that Songs For The Coming Home is maybe his most satisfying production yet and maybe that is another reason; his craft as well as his content has matured with the years. This collection is his most successfully eclectic in topic and sound and is without doubt his fullest, deepest, widest and highest work yet.

I reckon that it is for all these reasons that Martyn Joseph never shows any hint of the law of diminishing returns. Yet, as I pondered why I realised that this record more than any other gives me the definitive answer. Maybe a year ago in a conversation about music Martyn offered as a reason for his vocation that he was trying to write songs that would be companions on the journey. That is it! Martyn Joseph writes the songs that best get along side me as I stumble on my mental, emotional, political, cultural and spiritual journey. There is this honesty on Falling From Grace that is then balanced with the hopefulness of Still A Lot Of Love Around Here. Political musings are right there in Beyond Us and religion gets an audit in Not A Good Time For God. Archive is a song for the big scenery with its particular location Alberta, Canada but an accompaniment for any connection with the vast resonating beauty of creation and the mysterious miniscule preciousness of our humanity.

On Songs For The Coming Home, Martyn has a song that spells out his belief in the power of the song. Clara is as beautiful a story song as I have heard in many a long year. A black girl nurses a rich white unwanted baby and sings him songs. Years later and the baby is  grown up and in the mood for suicide when he hears songs in his head that he knows not where from and it pulls him back to live a life of literary grace. In their late years they are reunited and Clara sings the songs and suddenly the writer knows who saved his life. It is moving, profound and a theology of the importance of song. It is why I can’t take my ears off Martyn Joseph. He is one of my most important Claras:

“I hope we all have a Clara

Songs for the healing

And songs for the coming home.”