Post Christmas Day Thought; Will we Live in Open Skies or Ferry Boats? 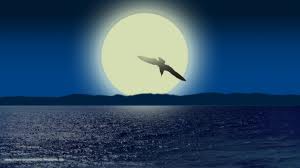 “For most gulls, it is not flying that matters, but eating. For this gull, through, it was not eating that mattered, but flight. More than anything else, Jonathan Livingston Seagull loved to fly.”

Jonathan Livingston Seagull is the central character in Richard Bach’s book named after him…and yes he is a seagull! He was no ordinary seagull though. He was a seagull who wanted to fly like no other gull had ever flown. Anytime of day you’d catch him, up in the high skies practicing. He had wings and if he could open them wide enough, just at the right angle then he could glide and soar and feel the delight of the Maker and live life to the fullest of life’s potential. While Jonathan stretched for the edge of life’s possibilities his friends and family plodded along after the boats, scavenging survival’s tit-bits of fish
and bread. Jonathan’s peers didn’t understand him and his family constantly nagged him about settling down. Flying is such a waste of energy when you can get the easy scraps of existence.

Jesus said that he came to bring us life and life in all its fullness. (John 10 v 10) The Message translates it “life beyond all our dreams.” Jesus didn’t get born in a stable, live among us, teach us how to live and then die and get raised to life again so that we would follow the Belfast-Stranrear ferry! The world around us tries so hard to bland us out, dull us down and blunt the sharp edge of all that God wants to lavish upon us. Radiohead warn us that the devil is having his way because we are not paying attention. To follow Jesus into loving
neighbour and enemy, storing up treasure in heaven instead of earth, making the last first and bring God’s kingdom and will on earth as it is in heaven is flying like no other human being has ever flown. It is taking the WWJD off your wrist and feeling the delight of God as you soar in the skies of what we were designed to be.

So? Bland or brilliant? Dull or techni-colour? Blunt or razor sharp? Open skies or ferry boats?