SPORTING SURMISE ON THE SPIRIT OR THE LETTER OF SOCCER RULES 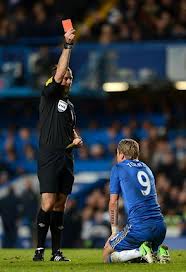 What a weekend of soccer controversy in the English Premier League. It is a shame that with such great soccer games like Everton-Liverpool and Chelsea-Manchester United that we are talking about referees but we are. Before we do though, let us just say that the Premiership is at its very best just now. Some of the goals scored this weekend were of the very top quality. Chelsea and Manchester United both looked superb for 30 minutes each and then of course Mark Clattenburg stole the last 30! As a Manchester City fan I was pleased, if far from thrilled, with our stroll around the Etihad on Saturday evening and a 1-0 win but, it has to be said, that Chelsea and United were playing at a pace and conviction that City haven’t got
anywhere near reaching this season; to be only one point off the leaders is either very fortunate or just quietly professional.

Let us then talk about referees and the laws of the game. Like the Match of The Day commentator on Sunday night’s Match Of The Day
2, “we have seen it all now... we have seen it all now.” Poor Mr. Clattenburg had simply a horrendous day. The shell shocked look on his face at the final whistle suggests he knows as much. The match was so perfectly balanced with thirty minutes left but two red cards to the home team was literally unprecedented stuff. Then the the winning goal for the away team was offside... well it is simply incredible. For me, both sending offs expose errors at the
heart of the game just now. When Ivanovic was sent off for tripping up Ashley Young, who was through on goal, Clattenburg had no choice but to produce a red card. It is the law not the referee who is at fault here. This rule was brought in to punish the “professional foul” which is the cynical cold blooded prevention of a player moving away from you. When that happened and a scoring chance was what was being prevented the rulers of the game wanted the letter of
the law to make it easy for the referee to send an player off. Once again the letter of the law replaces the spirit of the law. What this does is to make an accidental free kick receive punishment that it doesn’t deserve while a cynical professional foul gets away without a red card because some other defender is close by. How many hand balls are not given as penalties because it is accidental! Spirit verses Letter? Spirit loses. Ivanovic is undeservedly but rightly, by the letter, sent off. Luis Suarez’s cynical and violent tackle on Sylvian Dustin in the Merseyside derby even though it was nowhere goal was a
red card in the spirit of the law but the letter of the law won again.

Torres sending off for a second bookable offence for diving reveals another letter of the law getting out of control. Now, let me
say it clearly, cheating by diving needs kicked out of soccer. It is cheating. I abhor it. However, the referee needs to use his brain much better than Clattenburg did yesterday. Jonny Evans made contact with Fernando Torres so the only card shown should not have been to Torres. Sir Alex’s comments that Torres caused it by going down when he could have run on, as Sir Alex himself claims he would have done, were disappointing and wrong. If you are running at full
speed at a 6’ 1” defender and get touched at all it is likely you will be
knocked off balance. Clattenburg got this one wrong in the letter of the law BUT when we see Everton’s honest captain Phil Neville being booked for falling over we find evidence that, in order to cut out diving, referees will now book everyone who trips themselves up or stumbles over. Soccer is people running around a field. People will fall and trip accidently. If they get booked every time it happens the game is going to take another disappointing turn. Again the
cynical intentional needs separated from the accidental and it might be that cheating is knocked out of the game by lengthy bans on video evidence rather than making a mockery of the game.

The referees job is difficult. I found it difficult with two motley crews of students playing for nothing in the park. At the top level with television and amateur bloggers like me, it gets even more tricky.
This amateur believes they need more help than they are currently getting from “the letter of the law” that doesn’t always bring justice in practice.

The referees job is difficult. I found it difficult with two motley crews of students playing for nothing in the park