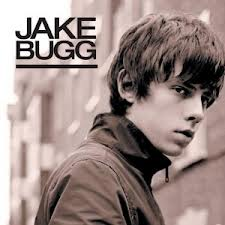 Jake Bugg! My word. What a breath of fresh air this young chap is. Just eighteen, he has the boyish looks to compete with a place alongside Justin Beiber on the cover of teen girls’ magazines. His sound is a little more aged and a lot less bubblegum. Of the fourteen songs on his debut record no less than nine are under three minutes but in those whirlwind moments your mind speedily skips across snippets of Bob Dylan’s Subterranean Homesick Blues and hints of
skiffle, folk, blues and even country. The closing Fire crackles like an old 78 and could be from a Smithsonian field recording from Louisiana a century ago! His working class English roots have drawn comparisons to Oasis but he has too much intelligence. Arctic Monkeys might be a closer contemporary comparison but Bugg is much subtler and more crafted. Eventually you realise that he has subsumed the history of music into compact splice of twenty first century song.

Being just eighteen Bugg has a lust for life in all its fullness. He’s seems disillusioned with those who “want the water not the wine” and climbs on a Lightning Bolt that knocks over anyone else in its path. On Taste It he’s “never felt more alive”. Yet Bugg is not naive and on that same song he sings “I can taste it in my mouth it’s just so bitter sweet.” His references to benefits, tower blocks and speed bumps on Trouble Town contextualise the record in English housing estate and his social observation is acute for one so young and though he is eagerly reaching for the future there is much in his
past to give Two Fingers to! After listening to the singles over recent months the album reveals a wider hue to Bugg’s palette with stripped back songs like Ballad of Mr Jones and Slide shifting pace and mood. Producer, and co-write on eight songs, Iain Archer has done an exemplary job of creating a density of quality and making something that is so  instantly catchy also rewarding with every
play. Bugg’s torrents of couplets can ease off to a light shower but at every speed this young man brings fascinating images and rhymes and lyrical twists. All in all, fast or slow, his songs grab you by the throat, draw you in, feed your head and heart and leave you always wanting more.

Thanks for every other informative website. The place else may just I get that kind of info written in such an ideal method? I have a venture thwt I'm simply now running on, and I have been at the look out for such info.