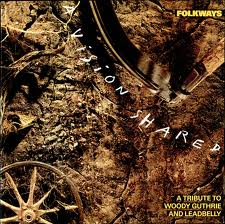 “Well Jesus was a man

Who traveled through the land

A hard working man and brave

Well he said to the rich, "Give your money to the poor"

And they laid Jesus Christ in his grave

Well this song was written in New York City

Of rich man, preacher and slave

Well if Jesus was to preach what he preached in Galilee

They would lay Jesus Christ in his grave

Oh they laid Jesus Christ in his grave”

It was an obvious choice when U2 were invited to take
part in the Guthrie Tribute Vision Shared that the would pick one about Jesus. It was in their serious period – 1988.

Woody Guthrie’s socialism didn’t cause him to lose his
vision of Jesus. Jesus was a fellow revolutionary and this is a wonderful exposition of the Gospels that was sadly being missed in many evangelical Protestant pulpits of Guthrie’s day. English vicar and author John Stott called the lack of social justice by evangelicals the great heresy of the Twentieth Century but here is a folk singer keeping Jesus Gospel alive. It is Good News to the poor and it causes the rich to crucify the rebel. Jesus radical life and preaching
had him nailed to the cross a good three years before it happened. Even his birth caused a generation of children to be wiped out by the death squads of power. More preachers like Woody Guthrie needed!

U2 is one of my favorite music band. I have all the albums of U2. From them, Jesus Christ is the popular one.

wow!good post!It is Good News to the poor and it causes the rich to crucify the rebel. Jesus radical life and preaching
had him nailed to the cross a good three years before it happened. Even his birth caused a generation of children to be wiped out by the death squads of power. More preachers like Woody Guthrie needed!

Hmm it seems like your blog ate my first comment (it was super long) so I guess I'll just sum it up what I had written and say, I'm thoroughly enjoying your blog. I as well am an aspiring blog writer but I'm still new to the whole thing. Do you have any tips and hints for novice blog writers? I'd genuinely appreciate it.

I am sure this paragraph has touched all the internet users, its really really good post on building up new website.

I have read so many posts about the blogger lovers except this article is genuinely a pleasant piece of writing, keep it up.

Hi friends, nice piece of writing and pleasant urging commented here, I am really enjoying by these.

Wow! Finally I got a blog from where I be able to in fact obtain useful data concerning my study and knowledge.

Magnificent beat ! I wish to apprentice whilst you amend your website, how could i subscribe for a blog web site? The account aided me a acceptable deal. I have been a little bit acquainted of this your broadcast offered vibrant clear concept

Very good information. Lucky me I found your site by accident (stumbleupon). I have book marked it for later!

It's appropriate time to make some plans for the future and it's time to be happy. I've read this post and if I could I want to suggest you some interesting things or tips. Perhaps you can write next articles referring to this article. I desire to read more things about it!

Hello exceptional website! Does running a blog like this require a lot of work? I have absolutely no expertise in computer programming however I was hoping to start my own blog soon. Anyways, if you have any ideas or tips for new blog owners please share. I know this is off topic nevertheless I just had to ask. Thanks a lot!

Yes! Finally something about fresh.

I am curious to find out what blog platform you're using? I'm having some small security issues with my latest site and I'd like to find something more secure. Do you have any recommendations?

Spot on with this write-up, I actually believe that this site needs a great deal more attention. I'll probably be returning to read through more, thanks for the information!

Outstanding story there. What happened after? Good luck!

I'm not sure where you are getting your information, but good topic. I needs to spend some time learning much more or understanding more. Thanks for fantastic information I was looking for this info for my mission.

I've been exploring for a little for any high-quality articles or weblog posts in this kind of space . Exploring in Yahoo I ultimately stumbled upon this site. Reading this information So i'm satisfied to convey that I've an incredibly excellent uncanny feeling I discovered exactly what I needed. I such a lot indubitably will make sure to do not fail to remember this site and give it a look regularly.

Superb, what a blog it is! This blog presents useful data to us, keep it up.