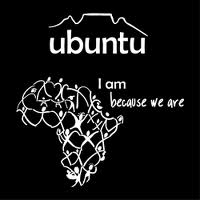 Africa was a central theme in U2’s Vertigo Tour of 2005. Bono’s
campaigning for Debt relief, trade justice and a response to the HIV/AIDS pandemic was again fired by his following of Jesus and met in his music full on during that tour. When it came to Where The Streets Have No Name there was the most amazing mass of colours dropping down the millions of multicoloured, Willie Williams designed, light bulbs that made up the band’s back drop. All the flags of Africa kept on descending in the most moving of light shows. During the razzle dazzle, Bono made his claim, “From the swamp lands of Louisiana to the high hills of Kilimanjaro, from the bridge at Selma to the mouth of the Nile…AFRICA…AFRICA…AFRICA…the journey of equality moves on, moves on…AFRICA…from town centres to townships…sacred ground, proving ground…” The link between the Doctor of the deep south of America’s inequality to the Archbishop and President of Africa’s inequality is potent art.

As I watched the show in Vancouver, Canada I found myself in tears as the South African flag appeared on the screen. Then there was a moment of revelation as I came to believe that it was from that country that the entire thesis of Vertigo originated. Let me take you from Vancouver 2005 to Cape Town in their dry, sunny winter of 2004. I had seventy University students in Cape Town over a period of eight weeks. No matter where we went there was this word on everyone’s lips. A township discussion in Guguletu, a sermon in another township Masiphumelele and in the much plusher offices of the vice chair of the Truth and Reconciliation Commission, Alex Boraine’s in Claremont. We were the Northern Ireland Chaplaincy group looking for some answers as to how South Africa has progressed in the decade after democracy. Most important of all why had the oppressed 80+% not retaliated against their oppressor but woed much of their youth to ride down the Rainbow towards a rich eclectic nation of true promise? The answer to our question was one word – Ubuntu; a recurring mantra!

So we all got back to our Backpacker and compared notes. What did Ubuntu actually mean? Had we taken down any definitions? “I can
only be me through you.” “I am me through you” “A person is a person through other people.” “I cannot be fully human without you.” We got the drift and the truth was profoundly powerful. We had been among a people who believed in the importance of the other person, even their enemies, as being crucial for the authenticity of their complete humanity. Such a people will show unbelievable tolerance, forgiveness and grace to everyone. We were still longing for a more succinct definition though.

A few months later many of the same group of students were home from Cape Town and in the Queens University Chaplaincy in Belfast having a communal first listen to the new U2 album How To Dismantle An Atomic Bomb. And there it is. Track 6 – All Because Of You I Am. Now there is a perfect definition of that Ubuntu thing. We are back to that song where Bono is declaring first and foremost his dependence on God. He speaks of being a child of grace. He declares his belief that God can make him perfect again. Yet, in the context of the Vertigo Tour a year later it became even more than that. I firmly believe that this then moved Bono out from his dependence on God to his dependence on those around him. It could be Ali his wife who without doubt has been a reason that Bono has become who he is. I believe though that it goes wider than that again into his new understanding and adoption of Ubuntu.

Bono told, Chicago Sun journalist, Cathleen Fulsani how Archbishop Desmond Tutu had introduced him to the idea of Ubuntu. Bono said, "Essentially, what it means is 'I am because we are.' And it's about the interdependence, how we need each other and we have a stake in each other. One part of the community can't thrive truly while the other part of the community is in the dirt. In tending to them, we will be better off ourselves. It's that simple. Ubuntu."

Ubuntu has its roots in Xhosa philosophy. Yet, it is profoundly a Biblical concept that challenges the individualistic selfishness of our modern western world. “Love the Lord your God with all your heart, soul, mind and strength and love your neighbour as yourself.” On this Jesus told us all the laws of God are kept. This, every Jewish child learned by reciting the Shema, was his purpose in life. Without it the world falls apart and inequality will destroy our humanness. In fact Genesis chapter 3 explains to us that the world did fall apart without it. Humanity’s selfishness led to a world very much one in relationship with God, fellow human, animal kingdom and earth was thrown into disunity. The Bible’s Good News is the story of a God who through His Son’s life, death and resurrection restored the possibility of reconciliation in every relationship.  Bono recognized that only when the child dying on the Cape Town township is perceived as equal to the child living in plush wealthy Washington DC suburb will we make Poverty History.

So this Biblical idea of interdependence using Xhosa philosophy as a conduit is captured in the idea of Ubuntu. This was the secret of how Nelson Mandela reconciled his people with the violent criminals of
the cruel white oppressor in post apartheid South Africa. Co-existence was vital not only to the peace of the nation but to the very identity of his people. Archbishop Tutu made Ubuntu the springboard of his thinking and turned it into a theology that the world needs to hear, waken up to and start living. U2 have heard it and are spreading the word – “all Because of you I am.” Everyone! Everyone being one is crucial to the wholeness of our humanity. It is the redemption Jesus brought. It is the salvation hope for the world!

Dear admin,this website is really useful. Thank you for everything.

I did a search on the subject and found mainly people will have the same opinion with your blog.