Home Archives Profile Subscribe
Lyric For The Day 27.6.12 from The Hand Of God by Duke Special
TO THE MARROW OF MY SOUL

STOCKI SURMISES THE HANDSHAKE... TIME TO MOVE ON 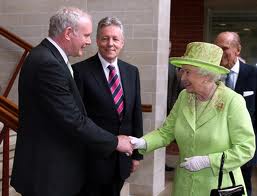 Yesterday was a historic day. It was my daughter’s
Farewell Assembly at Stranmillis Primary School and, though I will be back to do Assemblies in the future, it is our family’s last connection after eleven years; that is four more than I spent at my own school. Jasmine’s future is bright for the time she spent there and she is ready to move on. It echoes an event that happened half a mile away at The Lyric Theatre when the Queen Of Britain shook hands with Sinn Fein’s Martin McGuinness. This has also the potential of making my daughter’s future brighter. It is all about how many people are ready to move on. Some people need a good kick up the rear end and
told to move on. We are almost twenty years down the road from our worst days and everything from politics to night life to the relationship of Churches has changed. For many only deep rooted sectarian hatred built on a history that is never as black and white as they have built their prejudice on.

For others, though, it is a arm around the shoulder that is needed and I understand there are more difficulties to moving on. Last week I was honoured to be part of a Day Of Reflection event in Lenadoon where we remembered those lost in the Troubles. We were aware on the sacred ground of such grief. I as a Protestant was particularly sensitive. I remembered, in the most militarised Republican part of Belfast at the time, those murdered by guns and people from maybe this very community; my colleague at Fitzroy who as a two
year old lost his dad on his way to work murdered on a train and my friend from Primary School who lost his shot in a bar. As I remembered so Marissa remembered her husband killed by those from my community. Her husband was a Deacon Blue fan and she played the band on her way to the event as an act remembering and was then moved when I used their song Take Me To The Place for reflection; we bonded. Then there was Paul Gallagher who shared the Reflection from his wheel chair shot, again by my community. Reflecting in such depth of emotion I was brought face to face in a new way with the depth of pain and the utter futility of those lost and the carnage of the lives who live with it.

For Fr. Martin Magill and I it was a sensitive process
to help folk remember and then wrestle with the moving on. We were aware that the barriers for those who have lost most would find moving on difficult. And so with yesterday’s handshake. Yet, we believe as Christian leaders, that God always calls for hope, for peace and for ultimate redemption. We prayed and used the verse that Jesus taught us, “Thy Kingdom come, Thy will be done/On earth
as it is in heaven”. For me that verse is about bringing the peace of heaven onto the streets of Belfast. That has to be my priority; here I stand, I can do no other! I felt endorsed by Paul, a victim himself and leader of VAST (Victims and Survivors Trust) who shared, “This is a hard journey but there is always help there. All you have to do is ask for it. For those that can give help, all you have to do is offer it. It is, I hope, through this self-help and communal support that we can make this place a better place, a safer place and a happier place.”

It will take courageous and painful steps and imaginings to make this place a better, safer and happier place and as a Church
leader my job is to encourage those steps no matter how faltering, no matter how excruciating, no matter how brave. We owe it to Jasmine and her generation not to return to the days of the past. My fear has always been that our taking a breather in this grace time, that we have had since 1994, is not the way to move forward. Yesterday’s handshake is a strong symbol from a Queen who lost her brother-in-law and a man who turned from violence to politics. It was not
easy for either. For those who believe it was some political move for Sinn Fein I think it should be remembered that they will have lost votes yesterday among die hard Republicans; it was a risky strategy in their communities. For the Queen, and I am no Royalist, it was another sign of leadership, following her momentous time in Dublin last year. Maybe those who are loyal to her leadership need to find
some other icon to march for, claim Ulster for or kill for or need to follow her lead and move on.

I love this blog, this blog has a lovely content that inform many useful information for the readers..

Your mission, should you ultimately choose to accept it, is to determine the gap between abl lending within the Canadian marketplace vs not fake earlier this season, the group branched out by providing loans for businesses which can be between 3,000 and 10,000 within fifteen minutes.