GEORGE HARRISON: LIVING IN THE MATERIAL WORLD - The Album 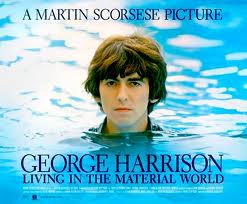 As a Beatle fanatic one of my favourite periods in their fifty plus years of history is that three year period immediately after they broke up. Here we see four young men dealing with a new world. Behind them the most prolific musical years and a the same time the most claustrophobic pop celebrity craziness. As 1970 dawned the bonds were broken and off went four men into a very unknown future. Ringo the drummer must have worried his career was gone but headed off to record songs his mother had taught him before finding some country tunes in Nashville. John was unravelling as The Beatles did and went off with Yoko into Primal Scream and the raw cathartic album that resulted. Paul felt he’d lost his vocation and purpose so he took off to Scotland’s countryside and made organic quirky records of domestic bliss. Of all of the fab four it was George Harrison who sniffed the freshest air. He had been living in the shadow and by Abbey Road was proving to be in the richest vein of writing form.

Harrison also had his faith and it proved a better inspiration than Ringo’s comic acting, John’s therapy and Paul’s farm. Faith gave Harrison a consolation, a reflective space to take in the events going on around him and subjects for lots of songs; and he wrote lots of songs! This record with unfortunately the same name as Harrison’s 1973 record gives a real insight into that post Beatles feeling. Here we have the songs that would make up the ambitious Spector produced All Things Must Pass in their early forms. Along with that Let It Be Me, Dylan’s Mama You’ve Been On My Mind and Women Don’t Cry For Me that wouldn’t appear until 1976. It is chilled out, unplugged, sparse but confident and free. The spirituality is in there in spades; My Sweet Lord, Awaiting On Us All and The Light That Has Lighted  The World. His spiritual farewell to the Beatles All Things Must Pass is in there too. These are guitar George’s first steps into independence and they would lead to him conquering the pop world for the next three years, way above the success of his three old mates! This record is beautiful and understated and a lovely little piece of post Beatles Beatle history.

LIVING IN THE MATERIAL WORLD - The Film

GEORGE HARRISON and THE ART OF DYING

It is up to the employer to develop and nurture the company’s relationship with its employees, as well as to keep it positive. This places unexpected demands on employers used to simply paying for what they get.