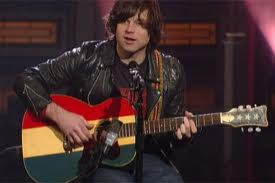 In my review of my last Ryan Adams gig in the same venue, which I can’t believe was ten years ago, I wrote about the “high speed shiftiness of his pinballing from one spotlight to the other as he moved from folk guitar to rock guitar to piano or in his constant lighting of cigarettes that the guitar smoked more of than him!” The first impact of tonight’s show is the different human being that Ryan Adams has become. There was no fidgeting, no shiftiness and not a cigarette in sight. Yes, he likes a swear word or two and tonight his guitars give him many reasons in the tuning department to use them. However, marriage to Mandy Moore seems to be agreeing with the wild boy of alternative country. He introduces the classic Whiskeytown song 16 Days by confessing that he doesn’t know what it is about having been so drugged up at the time. It is unspoken and very obvious that Ryan Adams has matured.

It is good news because when he sits on his chair central stage and breaks in to Oh My Sweet Carolina you are immediately gripped by the brilliance. The tune, the song, the voice, the guitar, the performance. Ryan Adams has been too often more interested in quantity than quality, and from the top of the Main Street of the music world in 2001 he headed down a few blind back musical alleys, but when he touches the heart of his art he is up there as the natural successor to Gram Parsons. Then there is a little Neil Young about him too. Adams is Young-esque in some of the guitar playing tonight but he Young has modelled that career that can play big and loud on one record and gentle and intimate on the next. Adams punk and metal products on the merchandise table tonight which is a long way from what we get in this solo setting.

Many artists find a careful spot on the set list for the quiet acoustic ballad and try to earn the right for a few moments of such respect. Tonight Adams starts with that few quiet moments and if anything gets quieter as it goes. Two hours of just Ryan doing his thing. He jokes about standing for the fast ones. There are none. He moves from sitting with guitar to standing with guitar to piano and it is ballad after ballad. Rescue Blues gets a subtle piano arrangement. In the vastness of his catalogue the set list is full of great songs and the five included off the new record Ashes and Fire fit snugly with the best; Dirty Rain could be a Belfast anthem with its “the last time I was here it was raining...”

What a night like this reveals is our love for sadness or our need for catharsis. Joking about the protest sound of his songs Adams added that they were all protesting happiness! Accurate. You hope a few good years with Mandy Moore might bring sunnier hues! In the end it is a beautiful kind of heartache that Adams purveys.

Stocki's review of Ryan Adams in 2002

This unrealistic approach will sap your energy and draw your focus from more important things. Remember that the goal of organizing is to live your life the way you choose, while setting up your home and schedule to support you.