WHY THE GOSPEL ACCORDING TO... CHRISTY MOORE 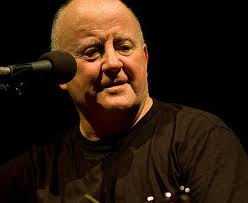 (as a Fitzroy collective of musicians perform The Gospel According To... Christy Moore in Clonard Monastery on Wednesday 13th March T 8PM (free - NO TICKET NEEDED), Stocki stops to ask why a group of Jesus followers would do such a thing!)

I will be totally honest and confess that the The Gospel According to... Christy Moore started as a gimmick but over the course of six months turned into a serious spiritual project. Initially I was asking myself how we Fitzroy Presbyterian Church could encourage some of the thousands of students who live around our building into the Church for an event. One of the gentle ways we have been using to encourage people to re-engage with Church and Christian faith has been a series of Gospel According To... events where the Fitzroy collective of musicians play cover version of a particular artist and I draw some spiritual meaning from the songs. We have done U2, Leonard Cohen and Van Morrison. The vast majority of our local residents are students and the vast majority come from the nationalist community where Christy Moore is a hero. If we did a Gospel According To... Christy Moore I thought, they’d maybe come along.

A change came when I made a hasty decision on an evening event at Fitzroy. An American group from Fuller University were with us and one of their staff said he had been singing Irish songs to the students and I asked him up to sing one. When he started into The Fields Of Athenry I was sitting beside him wondering if this song had any right to be sung in Church. It was then that I had an epiphany. The Fields Of Athenry and some of the other Irish songs that Christy Moore sings are songs of oppression with an Old Testament ring to them and a hope for the liberation from oppression (e.g. Amos 5) that Jesus declared right at the outset of his ministry (Luke 4: 18-19).

This revelation took me to a place of social discomfort. I was born and raised in the Protestant Unionist British side of the tragedy of Irish divide. As a result the oppression that Christy Moore sings about through hundreds of years of Irish history has been caused by those of us intending to sing the songs and commentate upon them. The youth of today would cry “Awkward.” Last year in Fitzroy though we had author Nicholas Wolterstorff who has said, “In taking side of the exploited, Christians find themselves in opposition to some of those who confess the same Lord.”

It is more of this discomfort that the Irish people need if we are going to be honest and authentic with our former enemies, ourselves and our God. In 2 Chronicles 7:14 God promised them people, “14 if my people, who are called by my name, will humble themselves and pray and seek my face and turn from their wicked ways, then I will hear from heaven, and I will forgive their sin and will heal their land.” This is one of those ways when we humble ourselves and admit to having and turn from our wicked part of the tragedy. That we should be doing this event in a Catholic Church in Lenadoon makes it even more poignant.

This has been part of our DNA in Fitzroy for thirty years. Winners of the Pax Christi Peace Prize, Fitzroy’s relationship with Clonard Monastery on the Falls Road is of worldwide renown. I was called to be minister in a Church filled with very brave people who met with a great deal of criticism and all kinds of vicious lies about their faith from their own community and also put their very lives in vulnerable places to make a significant contribution to the peace process in N. Ireland. This event is a very gentle follow up to that tradition.

Christy Moore sings a lot about his dissatisfaction with the Church. On Gospel According To... evening we look for hymns and prayers in the artists we choose and then we seek to unpack any of their work that caresses with the Christian faith. It took a little bit longer with Christy but hymns and prayers we found. The beautiful Listen has a call to be aware of God feel that is a lovely opening prayer/hymn. Jimmy MacCarthy’s Bright Blue Rose is a deeply holy hymn and I shared a very spiritual communal sing of it at Christy Moore’s recent gig in Belfast. The Least We Can Do is a commitment calling closing prayer/hymn. In between we will look at how Moore sings about oppression in Ireland and beyond and find a few clues as to a better Ireland and a better world. This is no longer a gimmick but a religious mission!

A great piece Steve - long may you continue, long may you thrive in this big hearted, Christ-centred vision God has given you.

Thank you Paul... Thank you for your encouragement... not everybody up here understands... central piece is North and South which I will write about later in the week... when Christy sings that live it is powerfully prophetic... thanks again...

Mr. Stockman,
You are at liberty to apologise for anything you want to. You might start by apologising for being a poor Presbyterian Church Chaplain at Queens when I was there.

However, apologising for things you could not possibly be responsible for is so much more fun. It allows the apologiser to feel such a warm glow of self righteousness.

Real apology takes courage. Faux apology of the sort above is simply self indulgent self advertisment.

This is the single most Christian act I have heard of this year, true leadership and visionary in every sense. May God strengthen your resolve.

I doubt very much that any kind of apology is "much fun". And if sincere (which no one has any reason to doubt) it certainly doesn't bring any warm glow of self-righteousness.

When we seek forgiveness it is an act of grace. It doesn't have to involve direct "responsibility", but can be a recognition that context has formed us all and brought us to the place where we are. My situation in life, with its privileges and disadvantages, comes to be because of choices good and bad that I and others have made. It is appropriate and christian to recognise that and "apologise" is not a bad word to describe the acknowledgement.

Steve's apology makes me uncomfortable because I am one of those (rare?) people - Presbyterian by conviction but neither a Unionist nor even a Northerner. So I can't fit this neat "two communities" model of our history, and it rankles. But I recognise that most people do, no point in fighting it.

One of the remarkable things about our Irish situation is that out situation has never really thrown up any properly worked out contextual theology when the situation cries out for it.

The gospel is not (just) in the church or even in the pages of the Bible, but out there in our cultures.

On behalf of the West Belfast Community I would like to thank you for coming to Clonard Monastery this month with you fantastic musicians. It was a great night and very moving.

The Presbyterian Church and the Roman Catholic Church have helped one another in so many ways historically. We have a lot in common. It is very sad that both Catholics and Presbyterians faced persecution in Ireland. The fact that our Churches survived this persecution is a testimony to the determination of our ancestors and the work of God.

Christian Unity is such a beautiful thing. So many people have never experienced this but they are missing out.