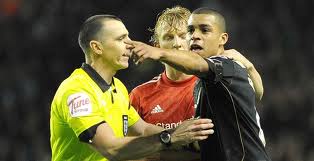 A few years ago I experienced something at a soccer match that has had me surmising ever since and it came back to the forefront of my surmising again this weekend. City were one up I think and the game was almost over. As the game moved towards injury time many fans were leaving and a seat beside me became vacant right be the steps. As a fan was coming down the steps something happened that caused him to sit down beside me for the final three minutes. In those minutes this man f’ed and blinded our team, our manager, their team, their manager, the referee and linesmen. It was like seething hatred from a disturbed man. It would be easy to say that he was one yob in the pack, an individual and that everyone else at soccer matches are OK. Yet, I don’t believe that this is the case. During the Manchester derby on Sunday as a United player chased a ball at the edge of the pitch the TV cameras showed the City crowd behind him. The facial expressions, howls if you could lip read and finger gestures were there for all to see. It wasn’t one or two who stood out, it was communal hatred. We need to ask what causes this vehemence? Is there something wrong at the core of our society?

It happens every week. Players returning to play against their own team getting booed repeatedly. Players who are seriously injured and moments later getting carried off for maybe a year on the sidelines booed and abused. Every time a player moves to a part of the stadium where opposition fans are seated the fans are on their feet shouting abuse. This weekend Phil Neville was getting booed by Tamworth fans and no one could even work out why. Simply for being the best known player? This is simply the ordinary abuse. If players should join rival clubs that abuse is even worse.

This weekend the dilemma was highlighted again when a Liverpool fan is arrested for possibly racially abusing Oldham defender Tom Adeyemi. This is a fascinating incident. Considering the amount of abuse that players take from stadiums of between 40,000 and 70,000 people on a weekly basis for Tom Adeyemi to take exception to one hurl of abuse is extraordinary; not that he should ever have had to take the abuse. If Samir Nasri had done the same in a recent game at The Emirates the game would have been stopped every few seconds! What I would like to suggest is that in a cauldron of the kind of hostility experienced at weekly soccer matches a racial phrase can be a second away at every given moment; an adrenaline rush of such hatred and we all go looking for terms of prejudice. Beyond that why should racial abuse be deemed different than the other abuse that is directed at players, referees or linesmen.

Liverpool FC’s official statement speaks about the reputation of their fans for fairness and “the actions of any one individual do not represent our fans.” I could not agree and disagree more. Liverpool fans have always come across to me as being fair and fun. I have only been at Anfield once but my experience in the Kop was very positive. That visit was a long time ago but if I had to stand with my sky blue scarf in any opposing fans area it would be Liverpool’s. However, what happened on Friday night was not the behaviour of one fan. It is a communal disease at the heart of soccer that needs dealt with and dealt with fast.

I do agree with Gordon Strachan when he said on ITV that “we (Britain – ed) rule the world in yob society” and that soccer shouldn’t take “the blame for all sorts of social ills” but soccer might just have the power within their iconic players and managers to make an impression on this malaise in our society. In the increasing absence of Church in our society there is a need for a place of community where people are handed down examples of decent behaviour towards neighbour and even “enemy” though one of the first things needing dealt how we define “enemy.” Soccer stadiums are probably the gathering place of most people on a weekend. The leaders of these gatherings have a responsibility, maybe even an opportunity. Do managers by pitch side, or on the media, show a different example. And what about the players? The sooner their huge wage bills include such responsibilities the sooner we eradicate such behaviour, not only from soccer stadiums but maybe even society in general. Yes, Gordon Strachan, soccer shouldn’t take the blame but it should recognise the size of the matter and see its new role within social networks and maybe someday take the credit for putting it right!