BRIAN J WALSH - KICKING AT THE DARKNESS; Bruce Cockburn and the Christian Imagination 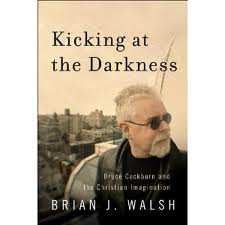 When my friend Gary Burnett told me about this book I thought that all my Christmas’s had come early. A theological treatise on Bruce Cockburn has been very necessary for years but surely he was such a cult artist that no publisher would ever see a book on him as profitable; fair play to Brazos Press under the Baker Publishing Group for the courage and vision. The author might have swayed the deal. Brian J Walsh has had some notable success himself particularly his Colossians Remixed; Subverting the Empire, written wife his wife Sylvia Keesmat and read by most people I know with an imaginative Christian mind. I’ve used it as a foundational text for preaching through Colossians – twice! Walsh like Cockburn is Canadian, a Christian Reformed campus minister at the University of Toronto and Adjunct Professor of Theology of Culture at Wycliffe College, Toronto School of Theology. That he was perfect for this particularly important and skilful task has been obvious for some twenty years since, in partnership with Richard Middleton, he has written the first serious theo-musicology I had ever read, a very lengthy essay on Bruce Cockburn called Theology At The Rim Of The Broken Wheel.

Walsh does a good few things in Kicking At The Darkness; Bruce Cockburn and the Christian Imagination. He confirms all your thoughts on your favourite Cockburn lyrics; they were as theologically potent as you always thought! He also reminds you how many great lines the Cockburn has written causing you to scuttle back to re-listen to every record right back to the first one. He actually causes you to realise the width and depth and breadth of Cockburn’s theological comment. Songs that you hadn’t looked at that close because you were so taken by other songs on the same album suddenly open up rich strata of Christian thought you’d never before seen.

Walsh’s approach is actually very simple and he uses this simple foundation to weave his immense insight into Cockburn’s songs to finish with much more than a commentary on Bruce Cockburn but a Christian worldview. Walsh has used these questions before particularly in his books The Transforming Vision; Shaping a Christian World View and Truth is Stranger Than It Used to Be: Biblical Faith in a Postmodern Age, both again collaborations with Middleton. The questions are where we are? Who we are?  What is wrong? And what is the remedy? From these questions Walsh dialogues with endless lyrics of Cockburn’s to answer the questions in very articulate Christian ways. From Cockburn’s creation dance songs particularly on Dancing In The Dragon’s Jaw to the brokenness of humanity on Humans to the justice at the rim of the broken wheel (Justice from Inner City Front) to some sense of kicking the darkness ‘til it bleeds daylight with particular reference to the more recent album You’ve Never Seen Everything we are showered with memorable line, couplet or verse after memorable line, couplet or verse. At times it seems that all Walsh is doing is being the thread that weaves Cockburn’s words together. It is an astounding work on an astounding music catalogue.

For me it made me fall in love with Cockburn all over again. It caused me to listen to songs like Dialogue with The Devil that had gotten lost in such a huge catalogue. Yet, it went way beyond that. It gave me a refresher course on my Christian worldview. It led me into theological thinking and inspired me to imagine the way the world is and how the world can be and how as a preacher I can at least attempt to share those thoughts in ways that are at least a percentage as creative and imaginative as Bruce Cockburn.

I really enjoyed the book but as I read I kept thinking something was missing and then I realized what it was, the music. All the analysis in the world can't capture the music. I found the theological insight was affirming rather than revealing and in the end it just made me want to listen to more Cockburn, which is a really good thing!

I've decided to respond to Neil's comment on the music in this book. He is absolutely right. As I was writing I was very aware of the fact that I am engaging (mostly) the lyrics in Cockburn's book, and not his music per se. And this is indeed a weakness of the book. But alas it also demonstrates the limitations of the author.

I very much appreciated Steve's warm review and his coining of the phrase "theo-musicology." To be more fully theo-musicological, we would need, as Neil rightly points out, more 'musicology' in the analysis. Maybe if I ever write another book on Cockburn or any other artist, I would go back to my general practice of co-authorship and find a colleague who can more adequately engage the music.

Thanks again, Steve and Neil.