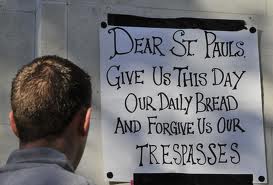 This Occupy London protest, against capitalist misbehaviour, at St. Paul’s has caught the nation’s attention, and far more intriguingly, drawn Jesus into the discussion. It seems amusing to me that a country that has been attempting to dismiss Jesus from the ethical and moral discussions pushed protesters onto Cathedral ground which, again seemingly by accident, brought Jesus into the heart of the conversation. I have watched with interest as Jesus was back on the front page headlines of newspapers and been bemused by political talk shows asking politicians what they think Jesus would do about the situation. Even some of the answers have been prophetically articulate! My colleague in ministry at Fitzroy, Jonathan Abernethy- Barkley, spent some time with the protesters in London recently and he was struck by how often Jesus was on the lips of the camped out community.

It is of course very appropriate as the Bible has an amazing amount to say about the dangers of money to the soul. When Jesus himself said that you can’t serve God and money he was not only talking about the individual – in Jesus culture he rarely was – but about society. He never actually said that having a substantial amount of money was a sin but his warnings about its deceitfulness, temptation and obstacle to human fulfilment was very clear. The Old Testament too has much to say on banking, business and the consequent condition of those who are affected by it. There is a lot about debt forgiveness in the books of the Law and there is a constant judgement coming down from the prophets on those who get rich at the cost of others wealth depravity.

So, for me, they might have stumbled or been pushed onto Cathedral property but it is an appropriate place to for the protesters to be. Indeed, in hindsight, should the Cathedral not have been the instigators of the protest. It is an obscenity of our society that anarchic capitalism should see the wealthy pump out multi million pound bonuses at the same time as the world struggles through a recession that those millionaires helped cause. Jesus and the prophets would have raged against what is happening just now. I have heard it said that that there is a fault line where the St. Paul’s and the financial heart of London meets; the tension of God and mammon. Perhaps a better way to arrange the scene would be to have the Cathedral as a sieve through which our financial behaviour is drained by the Biblical ethics of business. Then we wouldn’t be asking what Jesus would do because we would actually be doing what Jesus suggested we did all along.

Posted at 09:46 AM in SOCIAL JUSTICE - BLEND AND BLUR, STOCKI SURMISING | Permalink | Comments (0)