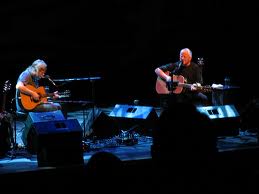 The first thing you notice is the age range of Christy Moore audience. Here’s, what is on paper, a folk singer, well on in age, bald and portly on a huge stage with just a guitarist, though Declan Sinnott is not just a guitarist, singing songs of love, justice across the world and the entire history of Ireland. He’s not cool, he’s not hip and he’s not beating X Factor to the Christmas Number 1 but from teens to the eighties, they are cramming in for a third sell out night in Belfast’s Waterfront Hall. Christy Moore is an Irish national treasure and a cultural phenomenon. He is our Elvis, Beatles and Dylan all in one song collecting troubadour. If you cut the strata of Ireland’s culture then he is embedded deep within it.

Let me explain the “our” in that last sentence. It says everything about a Christy Moore gig, and a lot about the foibles of this wee island that keeps my feet dry, when I need to explain my political position on the island of Ireland to make sense of this review. I find myself in the middle section of a Venn Diagram where one circle is Ireland and the other circle Britain. I am neither pure unadulterated one nor the other and find myself a half cast mongrel of the two. At a Christy Moore gig I try to drag the line of my central section of the diagram further across into the Irish circle but my British side gets a little uncomfortable at the naming of hunger strikers in No Time For Love and dedicating a song written by Bobby Sands to Sands’ son Gerard; something’s out of kilter in my head. At the same time, since I first heard that Sands’ song Back Home In Derry at Self Aid in the RDS, Dublin in 1986 realising that singing might be the safest option, by the time it gets to the end I am in love with my Irish part again. As an aside both Back Home In Derry and McIhatton, about a potcheen brewer from Glenravel, are so well crafted that in another life Sands might have been known as a songwriter rather than a terrorist/martyr.

Christy Moore sings the history, geography and current affairs of Ireland, and across the world at times too. A song from his new record Tyrone Boys is a case in point. A song that has changed lyrically over many years it speaks of some of the island’s darkest times in most specific of term and makes you cry at our darkness but somehow keeps the light of love for this tiny place shining in your heart. Missing You about moving to London, City Of Chicago about those driven out by the famine, Joxer Goes to Stuttgart about Ray Houghton’s goal against England in the 1988 European Soccer Championships (biggest cheer of the night and my British circle disappeared for a second or two!!!), Vive Le Quinte Brigada about Irishmen fighting in The Spanish Civil War all tell our story. Lisdoonvarna and Little Honda 50 add humour to that tale. When in Smoke and Strong Whiskey he gets the entire crowd to sing “Oh, oh the Holy Land...” you are intensely caught up in a spiritual audit of Ireland, your pride tempered with sadness and shame.

Not that Moore limits himself to Ireland. He has a heart, like Old Testament prophets, for the oppressed and songs like Victor Jara and Biko Drum sees him on the side of the leaders of freedom wherever they stood with the people. Most recent and most poignant tonight is Kevin Littlewood’s song Morecombe Bay about the deaths of 23 Chinese cockle picking migrant workers in 2004 – “Yes the tide's the very devil/And the devil has his day/On the weary cockle grounds of Morecambe Bay.”

In the midst of the genres of protest and storytelling Christy Moore is a gifted interpreter of the love song. Tonight we get Black Is The Colour, Beeswings, Nancy Spain and The Voyage, each stunningly beautiful and a blessing if your significant other is sitting beside you.

In the end Christy Moore, with the help of Sinnott’s stunning grace notes on various guitars, brings you to tears. Tears of heartache, tears of pride, tears of laughter and tears of unadulterated love; sometimes the tears of laughter and the tears of sadness are running at the very same time. Tonight’s major surprise for me was finding myself in a moment of deep souled worship. Moore loves Jimmy MacCarthy’s hymn Bright Blue Rose but tonight he gave it a reverence that drew in communal hymn singing between Fairytale In New York and Lisdoonvarna. It was utterly spiritual, “2000 years and still it grows...to ponder his life and his death eternally...” So I leave Irish, more aware than ever that I am not completely and being reminded that the secret of my life whether Irish, British or whatever is found in pondering Jesus life and death and angry at the injustices that he was born to smash. Now that’s a concert. Astounding!