STOCKI SURMISES THE "RIHANNA TOLD TO PUT CLOTHES ON BY CO DOWN FARMER" SITUATION. 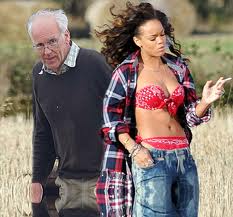 I love living in Northern Ireland. I have continually chosen it as my place to live and bring up my family. I committed my life before God, in whatever small ways I could, to its improvement, healing and transformation. However, living in Northern Ireland has many uncomfortable moments. One such moment arrived this week with the story that rang out across the world that Rihanna had been told to put some clothes on by a farmer from Bangor whose field Rihanna was using to shoot her new video. How embarrassing. It took me back to the early nineties when the world sniggered about my home town of Ballymena when they banned ELO from playing in the town because of drink, debauchery and the devil. It was Mr Blue Sky for goodness sake; they were hardly Black Sabbath!

So here we are again, our particularly conservative corner of the Emerald Isle all red faced because of some farmer. Could he not have found the fun in his fundamentalism! And yet, that is not what makes me uncomfortable. What makes me uneasy is the space I find myself in, somewhere between the farmer and the pop star. Yes, though I immediately scorned the religious nutter for being so uncool and 19th century I then started to ask if I thought it was ok for a woman to not only get her kit off in a field in Co. Down, where only a few passersby would see her and head to work to share their coup, but then show her cavorting to my young daughters who will watch the video on MTV and be sexualised about their gender and suggested what they should do with their bodies.

Last Christmas when X Factor showed some more than dubious sexual innuendo by both Rihanna and Britney Speirs, and called it fit for children’s viewing, I was one of many who wrote to Ofcom to share my thoughts. Just last week I was appalled during the Queen’s University Fresher’s Week when a local night club 411 drove a truck around the campus with very scantily clad young girls on the back. I am no prude. The fundamentalist farmer won’t be inviting me to preach in his Church but we need to make sure that our society begins to readdress our loose values around sex and the way we portray women. Having been a University Chaplain I have been close to the effects whether it is girls with low self image because they cannot look like Rihanna in skimpy clothes, a low self image that many times leads to self harm or eating disorders. I have had to walk out of the Students Union staring at the floor in case my eyes met with girls wearing next to nothing and as I left I have worried about the possible dangers that their state of dress added to their alcohol consumption might put them in.

MTV videos, magazine covers and the like have taken its toll on how men see women and what importance we put on sexual intimacy. Much as I cringe at the thought of an Ulster farmer telling a Barbadian superstar to put some clothes on and meet God I am also very uneasy about Rihanna’s contribution to the cheapening of women and sex. I’m uneasy because I might just think that of the two the farmer has done the least damage and perhaps most good. Could it be to quote Steve Taylor we are so open minded that our souls have leaked out!

It was interesting reading the comments on this story on our local UTV website and comparing them with those on Yahoo - UTV readers were embarrassed at how backward we appear to the rest of the world, whilst the rest of the world (on Yahoo anyway!) took the side of the farmer...

While I agree with most of the above regarding self-image and the over sexualisation of pop music (as well as TV, movies, online content etc) I feel there are several bigger pictures to be looked at.

Firstly it reinforces to the world that we in Northern Ireland still like to adopt some Draconian attitudes to modern day life. Whilst we're not quite on the scale of Westboro Baptist Church who were tastefully ridiculed by Foo Fighters recently, it is ultimately cringeworthy when the thoughts of one man take over mainstream media making us temporarily ignore wars, famines and major crimes against human rights all because some girl got her kit off in a field where comparatively few people would see. I also read with interest a tweet yesterday from David Hasselhoff who was looking forward to DJing at Queen's University despite Northern Ireland being the only country in the world to place a ban on 'Baywatch'. Moments like this are an embarrassment for a country which should be forward thinking and diverse.

In particular at this time of year, when the nation has invested a huge amount of time, money and effort into attracting the MTV European Music Awards to town; is this really the mixed message we allow to be sent out? Potential millions of pounds of investment could be made in the music and movies sector here. Not only have we attracted the MTV awards and the likes of Rihanna to the country but also had the likes of Sons of Anarchy and several high profile Hollywood productions shooting on our shores. It seems quite often we're able to turn a blind eye to the things we don't like in these shallow industries. Do we forget the drink and drugs consumed by the likes of Snow Patrol simply because they're local heroes or boys done good? Or is it because they're not female and boys can look after themselves.

I could rant on here for a lot longer but for the sake of brevity and in true Presbyterian fashion I'll note it in three points.

1. Northern Ireland needs to realise that the world has changed and that attitudes of acceptance are just as valid as condemnation in maintaining that "God fearing" society we've created. Isn't "God fearing" somewhat at odds with a God who is supposedly love anyway?

2. A comment read on Facebook yesterday states that sex sells. This isn't news to anyone but it also added the reason that sex sells is because we all still but into it. Rihanna won't mind this controversy at all as it's excellent promotion for her new video, tour and probable upcoming appearance at the EMAs.

3. There are bigger problems in the world which we all seem quick to forget and forgive. Chris Brown is still selling millions of records despite his well documented physical abuse of Rihanna. I sincerely hope that violence has not become a lesser sin than baring a little flesh.

Those are my initial thoughts on the situation anyway. Inadvertently a lot more people in Northern Ireland have now heard of Rihanna and have probably seen those "offending" images. I think we should live and let live and dare I say be thankful that the streets of Ulster are no longer witnessing the shooting of innocent men, women and children and instead have opened up to the shooting of big budget music and movie productions.

Regardless of whether you have a faith, almost everyone can agree that the sexualisation of the music industry goes to the line - and frequently crosses it. I admire the farmer for having the courage to speak to Rihanna face-to-face and say, "This is inappropriate." How often do we as Christians say one thing and live another?

If you listen closely to the radio interview and also read exactly what he said, he was extremely measured and only when pushed did he mention God. No Bible-bashing and he even referred to Rihanna as "gracious".

Ajectives from friends on the mainland to describe the farmer include: brilliant, marvellous and ballsy!

Well said that farmer. A man of his convictions.

no need to cringe Steve, the man did the good I reckon. The whole entourage was making a graven image, a little Rihanna idol in his field....and it looks like they took note of all those letters about X-Factor
http://www.guardian.co.uk/media/tvandradioblog/2011/sep/30/ofcom-moves-to-enforce-watershed

Hi, interesting post. I have been thinking about this topic,so thanks for posting. I'll probably be coming back to your blog for more interflow with you this Topic.

Interesting to read the good points about the topic. Alternative Tees my best and so good.
http://www.apparelnbags.com/alternative/index.htm