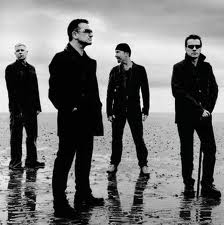 This lyric is very poignant to me this weekend as I am preaching on Hosea chapter 1 on Sunday morning. This is the passage in the Old Testament when the prophet uses the names of his children to bring a message of judgement to the people. When “Jezreel,” “Not My People” and “Not Pitied” were growing up I wonder when they picked up that their name was more than a name but a thought from God to suggest change in the world.

U2’s song Grace has particular resonance with my wife and I as we named our daughter Jasmine Grace in the same month that the song appeared on All That You Can’t Leave Behind. In many ways Philip Yancey’s book What’s So Amazing About Grace had made the nineties the “Grace Reawakening” decade amongst evangelical Christians. To be able to tell my students, when I was a Chaplain living with 88 of them, that they were loved as they were was an amazing joy and privilege and real help to their own spiritual, mental and emotional development. Grace was that central theme of the Scriptures that allowed that to be opened up. In essence it means unmerited favour. It means that God loves you as you are not because of what you have done but because God is love. God sent Jesus to live and die and be raised to life so that you could be welcomed back into God’s arms, perfectly portrayed in Jesus great story of the prodigal son. I spoke about this so much that one student actually said, “If you have a girl you really need to call her Grace.” We had already decided.

But Bono the theologian opens this word up a whole lot more. For many of us grace is just what I have described; God’s love that welcomes us in. As Mumford and Sons have sent it out there on the radio more recently, “It’s not the long walk home that will change this heart/But the welcome I receive with the restart.” Bono suggests it is more than that. He is right. Grace is a thought that literally should change the world if everyone who believes that they have received this grace begin to live it out in their lives. It is more than just a central doctrine. It is a concept to live life by. Grace to my family and friends in times of friction. Grace as I work with colleagues. Grace in my attitude to customers or clientele. Grace in my actions towards whoever my enemy might be in the society I live in. Grace toward the marginalised in my society or those living under injustice or poverty across the world. If we lived this grace in every area of our lives the world would be changed.

A name… and a thought that can change the world.