Home Archives Profile Subscribe
Lyric For The Day 23.6.11 from getting Ready For Christmas Day by Paul Simon
U2 at Glastonbury - critique from the sofa

STOCKI SURMISES THE NITWITS PROTESTING U2 AT GLASTONBURY 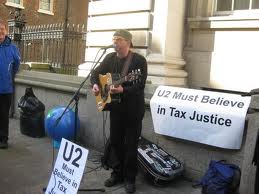 Channel 4 News have just spent some time grilling me about Bono’s financial matters. As if I would know! As if it is anyone’s business. Today of course it is everybody’s business as some clever group of artistic agitators intend to do some stunt at Glastonbury to shame Bono by suggesting how much tax he has avoided by moving the band’s publishing company out of Ireland where the tax was high. Perfectly legal but, say the begrudgers, could their recession hit homeland not do with some of that tax.

I have a myriad of answers to the protestors, the most important of which I dealt with in the article featured below; silencing one of the sharpest social justice voices of our time! Idiocy! My other answers are based around what I know of the financial dealings of U2. This was a band who should have left Ireland when they signed their first record deal; everybody else did. U2, however, made a decision to contribute to their own country. They set up their homes, spent their money, set up businesses, helped out other peoples’ businesses and paid their taxes. Though publishing royalties were tax free for a time, all other taxes were way above the UK or America. They decided to pay the higher taxes! It would be interesting to know who has paid more tax in Ireland than U2. Yet, they who’ve paid perhaps the most are being accused of evasion.

Then there is their charity giving. I am aware of various charitable contributions of U2. I couldn’t put those in my book Walk On; The Spiritual Journey Of U2 because they were never made public. Bono has a policy that comes from his Biblically shaped worldview that charitable giving should not be done for all to see; Jesus said that the right hand shouldn’t know what the left hand is doing! U2 were once offered £25,000,000 for the use of a song in a car commercial. They said the temptation was to give it to charity but they would then have to have declared that they had given it to charity! They take their giving seriously.

A television series once looked at the way wealthy celebrities squandered their millions. After the U2 episode the anchor man looked the camera in the eye and confessed they could find nothing but admiration for how U2 handle their finances. This is the band under the protests. The guys who have tried to be more accountable and the guy who has used his wealth to challenge the world’s social injustice become the objects of cheap stunts! Catch yourselves on!

BONO, TAX EVASION AND SHOOTING YOUR OWN FOOT

Stocki my friend I think you’ve oversimplified this and if you’ll indulge me I’d like to explain why I feel this. Think of the various emotional and logical factors that have come together that have led up to this.

- As soon as you tell others how to live, how you live yourself becomes others business; that’s just the way it works, and they way it should work

- Core to the social responsibility of all Christians, particularly those in public profile is that they render onto Caesar that what is his; tax is the closest thing we’ve got to tithes in 21st Century Western culture. Capitalism only works when the richest are taxed disproportionately higher than the rest

This is nothing to do with charitable giving (which I acknowledge comes under left hand / right hand stuff), but rather this is to do with moral national responsibility. Therefore, U2 could clear all of this up with a simple statement, but rather choose to remain silent.

So Stocki I am happy to go along with you when you say these guys have contributed an indescribably enormous amount to the cause of the poor globally.

However I can’t go as far as to say that they have no case to answer here or are morally pure on the issue; or consistent with what they preach in other areas.

Yours in Friday afternoon rambling mode

Is this not a basic citizenry question? The first responsibility is to pay tax in the nation you are resident. Whatever about contributing to the exchequer in Ireland, they are not resident in Holland.

I understand Bono's claim that Holland actually does contribute to developmental projects in line with their budgetary aspirations. U2's tax money is spent proportionately more effectively in Holland. But we are in ethically dodgy ground if we are trying to justify utilising huge resources (and the lawyers involved in such a move alone are not available to you or I!) for the sake of getting the best "deal" out of paying tax.

The protest is grandstanding. The whinging is ungracious. But the initial 2006 decision, I feel, still smacks of hypocrisy.

"Though publishing royalties were tax free for a time"

This is a somewhat disingenuous statement. That "for a time" was until 2006, which means for 30 of U2's 35 years of existence they were getting publishing royalties tax free and I'd imagine that amounts to quite a considerable amount of money.

This is my first time i visit here. I found interesting things to many in your blog, mostly to the debate.

This is my first time i visit here. I found interesting things to many in your blog, mostly to the debate.