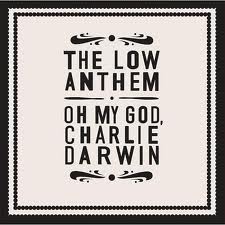 - from Charlie Darwin by The Low Anthem

What a beautiful start to an album. Upon their tender soundscape Low Anthem begin with the hope of another day. They set out, seeking a destination that is better than the one they are leaving. The Mayflower puts it into its historical context; the pilgrims leaving for the new world that became America. Was it heaven? Or did they bring their broken systems and human theories and failings with them.

Jesus kingdom is to come on earth as it is in heaven. It is not about waiting until we find a geographical utopia. It is about bringing God’s kingdom here, now, wherever we are. Don’t run from yourself and your community’s problems and hope that there will be some Promised Land elsewhere. Find it where you are; the Kingdom is among you!