Lyric For The Day 2.2.11 from The End Of The End by Paul McCartney 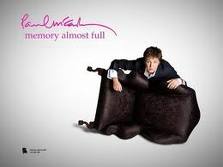 From The End Of The End by Paul McCartney

This is a rarity in the Paul McCartney song catalogue. McCartney’s lyrics let him down. Rarely does he touch the great poetry here. But never before has he been so deep, so spiritually deep and so eschatological! McCartney does know about death losing parents, wife and two Beatles. What faith he is believing here is hard to understand though he does touch on Christian and eastern faith In his most spiritual work, the more classical, Ecce Cor Meum he mentions being shaped by a philosophy “the faith in a benevolent spirit.” It is pretty non committal! Yet, in Ecce Cor Meum (check back tomorrow!) and this one rare rock track he touches the spiritual and I as a Christian can shake hands with the sentiment and actually, whether Macca knows it or not, the theology of it!