Horslips - Live at the O2 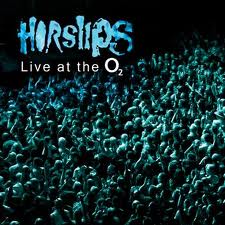 I have written before on this blog about how vibrant an experience it was to be at a Horslips’ gig in the seventies. I feel I got very fortunate as I came late to the play seeing them for the first time in Bundoran in June 1979. I was able to repeat that sweat soaked t-shirt experience again that December standing for a moment and taking in the phenomenon that this band was. It was old Irish jigging and reeling and the communal feel of set dancing brought into a new age of rock with precision playing and great songs filled with the myth and history of the nation. I think I got only one more Belfast gig in the Ulster Hall before the band split in 1980.

There seemed no chance of a return of the dancehall sweethearts and certainly not after nearly thirty years when out of the blue, due to an exhibition of old merchandise, Horslips reformed in 2007 and an acoustic album of old favourites arrived, followed by a brilliant movie of their glory days. The movie showed them tripping across a show band Ireland like John The Baptist straightening the crooked ways for the arrival of U2! One step at a time, in the domino effect of that exhibition, and it was pretty much written in the Irish stars that a full blooded reunion gig would happen and sure enough by December 2009 they were filling Dublin’s 02 and Belfast’s Oddessy with the fans who had yearned for decades for such a moment.

The live album just released shows that they didn’t disappoint. There is something about Horslips’ musical fusion of Irish trad. and guitar driven rock that transcends the past and the present and sits wheresoever you want to place it. One of the wonderful things about this record is that it brings the two differing Horslips’ sounds and sets them together. Horslips fused rock and Irish trad. but their early albums were more about adding rock to trad. where later on they added trad. to rock. Here those two approaches are placed in the same 120 minute set and everything is a little more seamless blending as they work in general through the years from the King Of The Fairies beginning to the Shakin’ All Over Final encore.

All in all this record of their O2 comeback reveals what a great band of players these guys are and what versatility they showed in the vast amount of music they produced in just one decade. There are tunes that transport you to the western edges of the island, caught with in a wee pub session with the best Irish folk band in then you are swept away to The Ulster Hall circa 1979 and the very floor is bouncing to a full on rock sound with fiddles swooping and swirling around it. There are guitar riffs to die for and the fragile subtlety of the folk tunes. If you’re looking for a negative then perhaps the vocals are the only thing that seems to have aged slightly but when you get into an eight minute version of I’ll Be Waiting you remember what a guitar hero Johnny Fean was; oh my word! Elsewhere O’Connor concertina and fiddle is quite remarkable and Lockhart’s flute on Trouble With a Capital T; well that was the riff and rhythm that we bounced to! Trouble has to be one of rock’s finest live moments!

Horslips covered a lot of Irish history in their work, or at least the myth and legend of it in their albums like the Tain or the trilogy that sees arrival in Ireland (Book Of Invasions), famine and emigration in Ireland (Exiles) and the following of the Irish in the United States (The Man Who Built America). The band itself has their place in Irish rock history and this is an historic record of the reformed band’s comeback gigs!

review of Horslips' Roll Back

Horslips are the BEST Irish Band ever!
U2 are the best American band ever!