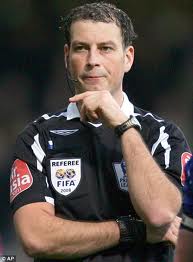 Let us look at the entire cast and see who got it wrong. Nani’s hand ball was an attempt at cheating (nothing new there when the red side of Manchester are in the penalty area!) but his “hand of Ronaldo” failed and the ball ended up in the seemingly safe arms of the Spurs goalkeeper Gomes. At that point Mark Clattenburg made the right decision to play on. It kept the game moving and actually gave Spurs the opportunity to spring a counter attack that would have been very much to their advantage. Where the ref. got it wrong was in not thinking that Gomes might be the idiot who would drop the ball and take a couple of steps back before clearing it! He should also have booked Nani when play broke down and that would have been even more hilarious, but equally correct, to have booked him after he had scored.

Gomes made the cardinal error that we all learned in Primary School; play the whistle! This is the only mistake made. Well the assistant referee raising his flag was not clever and Clattenburg going to talk to him was no help either. Ferdinand in both their faces while they spoke? Well like United players cheating in the box, nothing new there either! I actually wonder if Gomes knew once he’d dropped the ball of the predicament he was in and tried then to fool Nani by stepping back as if a free kick had been given. Remember Barthez claiming offside when one on one with, Harry’s then team, West Ham United springs to mind!

Harry Redknapp is not wrong either when he says he might not give anymore TV interviews. The FA demand as part of the TV rights that managers speak to the press four minutes after the final whistle and then fine them when they speak the truth. Sort it out FA. Harry was wrong to call this a farce but not wrong to speak his mind!

have to say, i agree 100%. but to be fair to nani he was just doing that thing they do.. he was sure he'd been fouled so put his hand on the ball to force the ref to make a decision, a bit annoying but not a cardinal sin. as for the ref, he played on as spurs had the ball and were chasing the game, its not his fault that gomes did something stupid.