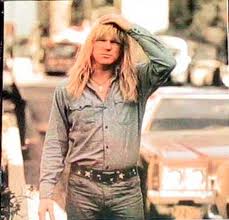 “Alice is a drag queen, Bowie's somewhere in between
Other bands are looking mean, me, I'm trying to stay clean.
I don't dig the radio, I hate what the charts pick
Rock and roll may not be dead, but it's getting sick.
All over the world disc jockeys sound the same
And every town I play is like the one from where I came.

Rolling Stones are millionaires, flower children pallbearers,
Beatles said All you need is love, and then they broke up.
Jimi took an overdose, Janis followed so close,
The whole music scene and all the bands are pretty comatose.
This time last year, people didn't wanna hear.
They looked at Jesus from afar, this year he's a superstar.

Dear John, who's more popular now?
I've been listening to some of Paul's new records.
Sometimes I think he really is dead.”

From Reader's Digest by Larry Norman

Larry Norman at his very inventive lyrical best with some of his most shrewd cultural critique. The rest of the song looks at the American political scene and beyond, takes us to the moon and back to planet earth. If you want a Christian perspective on 1973 look no further. And “Dear John whose more popular now” seems even more prophetic forty five years after John Lennon’s original comment and thirty years after his death.

One of my favourites...but it should never be forgotten that the musical and lyrical structure of this song owes a HUGE amount to Dylan's "Subterranean Homesick Blues".
In many ways Norman was not a uniquely original artist, at least musically, but drew creatively on a huge range of secular rock and roll to produce something fresh within the Christian sub-culture of his day... As such he's a great inspiration to people like me who has never had anything approaching an original thought in his life, but is a relatively creative magpie... RIP Larry... And I hope your migraine gets better soon Stocki...