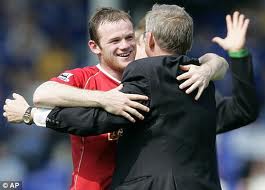 Now that the Wayne Rooney farce is all settled and he and Sir Alex Ferguson are hugging each other again, we should stop and reflect on what exactly happened this week; who bullied who and what is the greatest fear at the heart of it all. Wayne, who is not exactly in the kind of form that would attract Armagh City just now, has been accused of bullying a legendary manager and a big club. Really? I wonder if we got it the wrong way round. And how much at the core of this seemingly sad soccer scandal do we find the increasing shadow of Manchester City looming over the old Empire.

Let us first look at the events of the week. On Tuesday Rooney injures an ankle in training putting him out of the Champions League game the next day. It is at this stage that the staging of the media scrum kicks off. Good timing perhaps! Rooney has apparently stated way back in August that he is not keen to sign a new contract. He has challenged the club’s hierarchy with what we all know; this is not as good a United squad as we have seen over the past twenty years. This is a team that used to be 2 down against weaker teams and win, not be 2 up and draw as they did at home to West Brom last Saturday. The supporters can’t argue there. As some fans have said on Facebook Rooney was right! However, all has been kept quiet since August so why now?

It seems to me that Rooney found himself in the whirlwind of the clever old bullying of Sir Alex. It was Sir Alex, against all his past strategies of keeping these sort of things in house, who outed the issue. Why? Well he wanted to put Rooney in a corner, turn the fans and make the young man look even more ridiculous than normal. Let us face it, history tells us that you don’t mess with Sir Alex and stay! So whatever happened here Rooney wasn’t calling the shots. I say it very rarely but well done Sir Alex for getting a young brainless millionaire and his greedy agent to stand down and come home with their tails between their legs. Now Rooney has to win back team mates and fans which should focus his attention and perhaps get him back to scoring goals the way he used to. However, maybe Rooney needs heard too. He has proved he can score in the right team playing well. At present his lack of goals might say more about the other ten players than it does about him.

The other fascinating new player in the equation is Manchester City. The fear that he was going there, the very suggestion that it was the only place an ambitious young player could go, says a lot about the changing horizon of world football. Sir Alex might just have been glad of the new noisy neighbours this week because the fear or threat of him heading there has been stirring up the pressure of fans who two years ago would have laughed at the idea. Of course it is unlikely that City would have been interested. Teves is twice the player that Rooney will ever be, Rooney’s only advantage in the press being that he is English which for some reason, certainly not World Cup stats, inflates the country’s opinion of his abilities.

All in all though in a week where hundreds of thousands of people might lose their jobs due to Public Sector cuts it is very sad that the News Channels were concentrating on a millionaire becoming even richer while many vulnerable families will become a whole lot poorer. Ian Holloway should be listened to when he says there is something seriously wrong with football; “The world has to change!”

Methinks you are in denial... Alex ain't!