Home Archives Profile Subscribe
Lyric For The Day 30.10.10 From Any Road by George Harrison (for John and Gillian)
Nani's Farce Goal Was Perfectly good! 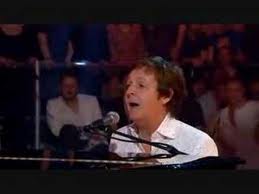 Paul McCartney’s performance on BBC television’s Later... With Jools was quite astonishing. It was quite a show. Neil Diamond and Elvis Costello also guested but it was the mark of the man that McCartney blew them all away and had the other major hitters basking in awe. It wasn’t Neil and Elvis though that you sense old Macca was competing with. In the month when his old writing pal John had major media coverage to commemorate what would have been his 70th birthday Macca has decided to distract the spotlight and release another remastered version of his best post Beatles album Band On the Run. These performances were to compete with John and only John.

Two songs on Tuesday’s live show and then two more on Friday’s full blown programme was more than a treat for McCartney fans. I have said somewhere else recently that this is McCartney’s best band since Wings Over America in the mid seventies and it might actually be better. Rusty Anderson, Brian Ray, Abe Laboriel Jr., and Paul ‘Wix’ Wickens, have been a solid unit for nearly a decade now and Wickens for well over two, and they are well match fit. The intensity of their performance makes this no old man milking the old times. Jet is a rocker and Band On the Run rocks and rolls. Where I got most excited was a rare performance of 1985 with McCartney banging the keys like Leon Russell whose own legacy is being revisited with his new album with Elton John. It was mesmerising stuff, full on rock out in a TV studio. Let Me Roll It was sweet too with that delicious guitar motif shaper than a two edged sword. These guys rock and McCartney has to keep up.

He keeps up very well for a 68 year old. Yes there are a few moments when his voice maybe shows signs of aging. But McCartney’s voice had as much ability to rock as Lennon’s – think Birthday or Helter Skelter – and it still can fly. You can ask Robbie or Brandon or Bono and I’ll bet that they would dream to be this crucial as they near their three score years and ten. I have no idea whether I or anyone else needs another Remaster of Band On the Run but these performances remind us just how brilliant an album that was and makes you just a little bit more tempted. Paul McCartney generally gets a poor press for the softness of his later output but on these performances live on Britain’s flagship television rock show he needs our deepest respect.

Agree with your point of view

There is no question that there is an unseen world. The problem is, how far is it from midtown and how late is it open? Do you think so?