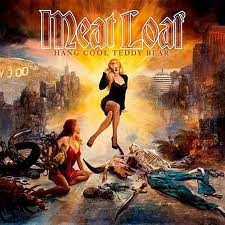 From Running Away From Me by Meat Loaf/John Foreman

On a weekend when X Factor were singing Guilty Pleasures (yes I am watching - it is a family thing!) I wondered about doing a Lyric For The Day on one of my Guilty Pleasures. In 1977 I was blown away by Meat Loaf’s UK TV debut on the Old Grey Whistle Test. I got my hands on the album Bat Out Hell and played little else for about two years. Since those days Meat’s overindulgence has made him a little bit of a guilty pleasure. Yet, though I have listened  sparingly since Deadringer in 1982 I have still eventually bought all his albums, and Jim Steinman his writing partner’s too!

So yes, I even bought his recent Hang Cool Teddy Bear album and was thrilled to see a Jon Foreman song on there. Foreman is the main man with American band Switchfoot and has written some great theology in song over the past ten years. He in some ways baptised Meat Loaf for me; it gave me a reason to justify it! How sad am I!

And that is exactly the kind of sadness that is going on in this Lyric For The Day. The character in Running Away From Me is trying to put the blame on to someone or something else, a human trait that has been part of all of our DNA since Adam brushed it on to Eve back in the Garden. As he hopes to solve his dilemmas by running away from people and situations he suddenly realises that the dilemma goes with him. In the end he realises that he is the problem and knows that it will do no good to run away thinking he can escape from his sins. The sins are running with him; he is the one who needs redeemed.

And who’d have thought? Spiritual truth on a Meat Loaf album!