Home Archives Profile Subscribe
Lyric For The Day 21.10.10 from In The Sun by Joseph Arthur
ROONEY, SIR ALEX, NOISY NEIGHBOURS and PUBLIC CUTS 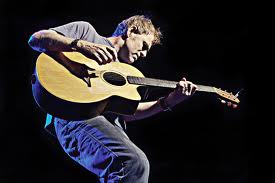 “...Meanwhile little David takes his books off to school
And learns of the times gone past
And when it comes to questions he puts up his and
There's something that he just wants to ask
Please sir can you give me and answer
Please sir you know it doesn't seem fair
Last night as I walked through the door
I thought I saw my father crying sat in his chair

Please sir can you give me and answer
Please sir you know I just can't see
Please sir when you make these decisions
Do you have a vision of what happens to me.”

Last Friday night (October 15, 2010) I was hosting an Evening With Martyn Joseph. During our conversation we spoke about the Chilean miners who we’d just watched that week being rescued after 10 weeks underground. I quickly turned to Martyn’s songs about miners in his own Welsh homeland and asked him to sing a miner’s song. He sang Please Sir. It is a powerful song filled with an Old Testament rage about the loss of more than people’s livelihoods. It is about the damage to a father’s soul that impinges on his son’s psychological health. It does what Christians should always be about doing, it rattles the foundations of power with a critique that cuts to the core of the issue; the core that God is most interested in.

Just a few days later the words seem vibrantly apt for the new Public Sector cuts of the UK’s Conservative government. These cuts in Public Service will cost many people their jobs and most commentators have stressed how families with children will be the worst hit. Anyone who has had even a scan across the Scriptures and particularly the Old Testament will know how much this is an anathema to God; children and the poor are God’s two most important groupings when it comes to any decision making. The prophets rage against the wealthy and their ivory furniture in big homes while the poor suffer. Yes, we are up the financial creak without a paddle but, in the sorting of it, we should not be thinking about sorting the balance sheets at the cost of the children like little David in Martyn’s song. It seems even more obscene in a week that a brainless (and goalless!) footballer can hold his employers to ransom for a ridiculous wage. Who can afford higher taxes or cuts? I reckon there will be more David’s living in damaged homes, that God is angry and Martyn’s song is sadly the most pertinent that he sang last Friday!