(the fourth in my series of reviews of John Lennon albums...) 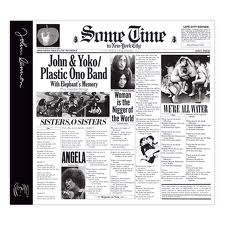 When I started reviewing Sometime In New York City I wanted to slate it as Lennon’s worst album, dismiss it as a politically naive ramble that has aged so badly that it is the last record of the ex Beatle that you need to buy. And as I re read it I have to say that all of that introduction is true but...

It is the home of three of Lennon’s best rockers. New York City, perhaps Ballad Of John and Yoko Pt 2, on the record itself is just such a great rock out and I never get tired of remembering how good it is. On the extra disc there is a powerful eight minute live primal scream version of Cold Turkey and also Well (Baby Please Don’t Go) a little Lennon gem hidden away. Lennon is best when his voice hits full volume, something already rediscovered on this Remasters series in the Double Fantasy Stripped Remix.

Yes, some of the tunes are sloppy and nursery rhymish but there is also something endearing about the loose almost punk sound of the Elephants Memory Band. The guitar riffs are edgier and rawer than on any other Lennon solo release. It is musically interesting, intriguing and eccentric.

Yes, there is a sense of yesterday’s news about the whole thing BUT that is a part of its original purpose. Lennon and his collaborating wife had no intention of this record being about longevity. It needs to be remembered that for Lennon music had fused with politics and avant-garde performance art and Sometime In New York City was where those things mixed the most. This was a politically agitated couple making a statement about how the world was at that moment and time and giving their opinion. If Lennon had made it to his seventieth birthday he might well have been asking in that acerbic Scouse accent why on earth we were even discussing it. They were trying to make a record that sounded like a Newspaper. The Lonesome Death of Hattie Carroll it ain’t but if you are looking for a record of leftist New York politics in 1972 look no further!

So, I can understand why it was out of print for so long and why it might be the last of the Remasters that most people buy BUT I have learned to see it for what it and to appreciate it as such. Yoko Ono has remastered it in 2010 so discuss it we must. It is politically naive in most places. Woman Is The Nigger Of The World probably still has a point but is so politically incorrect that it is hardly making radio rotation in 2010. Most other issues were very much of the moment and most of them very poor judgements. Lennon was right, as has been proven in the recent with the 2010 publishing Bloody Sunday Inquiry, to react against the British Army’s actions on that January day in Derry in 1972. However, to take the IRA’s side in the debate was really not a smart move from a man who wanted to Give Peace A Chance! The other fascinating song is about the American military’s over reaction to a hostage siege at Attica State Prison and again the Ono Lennons lost a little perspective when they made an appearance at a benefit for the prisoners who had died. Eight years later John Lennon’s own murderer would be a prisoner in Attica State and Yoko Ono has had less sympathy for Attica State prisoners, at least that particular one in more recent times.

All that said though I am pleased that this record has a place on my John Lennon shelf. It’s an important side of Lennon no matter how unimportant some of the songs sound today. In a world of early seventies acoustic introspective singer songwriters it kept the protest side of rock alive. It is as flawed as Lennon was himself but still has enough to commend it.

Yoko Ono - Between My Head and The Sky reviewed

Your article is wonderful,i like it,can you ask you a question,why my post view is low,can you help me. thank you .

And even you if you have bad credit, it's still possible to advance good conditioned used vehicles my website in addition, people that have bad credit score due to a tricky economy where vendors could not paid on account of customers not buying merchandise or having zero working capital for your business.