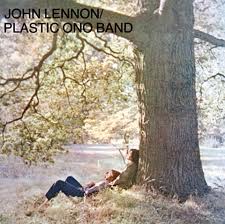 John Lennon was a seeker of salvation. The deep hurt of his damaged soul needed serious fixing and most of his life was spent searching for solutions to the very obvious dysfunction going on in his psyche.  Music and then the fame brought distraction but never solved and maybe heightened the angst. The wealth and fame of being in the biggest pop band in history certainly opened other doors to finding salvation. Using his fame to become a peace and justice campaigner gave another sense of purpose to the his turbulent soul at a time when his wee gang of best friends were falling apart. Avant-garde artist Yoko Ono was certainly the closest that Lennon ever got to soothing his soul but even that was not without some turmoil. Plastic Ono Band was an album that literally recorded one of his other attempts at redemption; his time going through Arthur Janov's Primal therapy.

Plastic Ono Band is a very raw piece of rock; in music, in lyric and in content. These songs were the screams of a man in therapy hoping their primal catharsis would save his soul. Green Day main man Billie Joe Armstrong has said that without Lennon he would not have “known what true honesty in music is” and when people think of his honesty Plastic Ono Band is where they start. Yet, Lennon had been pioneering honesty long before people even noticed. At the height of The Beatles’ mop top happy clapping “yeh yeh yehs” Lennon slipped onto 1964’s Beatles For Sale record his first cry for help, I’m a Loser, and followed it in 1965 with a literal Help!; a hit single, and title track of an album and film.

In 1970 with The Beatles as a collective dissolved Lennon had now a freedom to be even more explicit and autobiographical and this collection of songs sure was. It starts and ends with the crux of all Lennon’s problems, the loss of his Mother. The opening Mother could have been dressed and sold sentimentally every Mother’s Day but Lennon’s pain made it far from sentimental. Primal, honest, raw... call it what you will but it is one of Lennon’s greatest artistic moments. Mummy’s Dead is not so brilliant as a song but you don’t miss the truth of the message. The rest of the album is littered with similarly stark productions switching from guttural cries like I Found Out to respites of tender calm like Hold On and Love usually a turning back from the abyss for a kiss from Yoko.

Three tracks worth an exploration are Working Class Hero, How Do You Sleep and God. Working Class Hero is one of Lennon’s classic moments of songwriting. The fact he was never working class and might have written this in his luxurious Tittenhurst mansion doesn’t dilute a struggle to survive in a oppressively conformist world; whether the title is technically flawed or not it is a cultural aware, prophetically provocative and barbed. How Do You Sleep is on the other hand not the best example of his craftsmanship but as an attack on his old writing partner and best friend Paul McCartney it was always going to garner attention. It is clumsy of lyric but the cold hearted vengeance is near frightening. God? Well this is the heart of the piece. Here Lennon strips away everything claiming he doesn’t believe in not only God but nearly everything else in his world including, in concluding, The Beatles! He finishes, what could be seen as the theological or philosophical sermon, by claiming that when all is stripped away he is now simply John; that the world will need to move on; and that the dream is over. It might be the final full stop on all the hopes of the sixties.

All Lennon believes in now is Yoko and himself. His belief I guess is to strip away all the skins of the onion and he’ll get to the core, the truth. However, of course, when every skin is ripped there is actually nothing at the heart of the onion and we cannot find that salvation that Lennon was seeking without everyone else or indeed without God. Lennon might never release an album as intensely or intentionally painful again but Crippled Inside off Imagine, the entirety of Walls and Bridges and I’m Losing You from his final release Double Fantasy would be more pain filled reminders that he never found that salvation that he might have thought Janov had brought him in 1970.