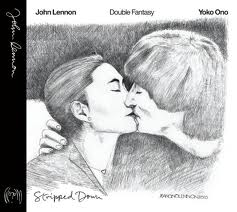 Double Fantasy with its lead off track (Just Like) Starting Over was supposed to herald in a new chapter in the life and art of John Lennon. It was never meant to be the epitaph; it was an awkward shaped fracture of an iconic life. Thirty years after its release, for what would have been the seventieth birthday of John Lennon, we are given an opportunity to revise our thoughts on what was Lennon’s last record released in his lifetime. For many it was not what they had been looking for. Lennon had been away from the spotlight and record business for five years and hadn’t released an album of original material for six. The domesticity of the content and the pop sheen of the production were a disappointment to those who were hoping for the raw introspective Lennon of his Plastic Ono Band album or the political anger or alternative imagining of Sometimes In New York City or Imagine.

John Lennon was a damaged soul and for a decade the world was listening to the whims of this imbalanced and angst ridden young man. He flitted from one cause to the other contradicting his reactionary idealism from record to record; Give Peace a Chance one day and support for IRA terrorists the next. His personal life was also in chaotic disarray, again chronicled in songs like Cold Turkey about drug withdrawal and Walls And Bridges, an entire album about a “lost weekend” away from his soul mate, second wife and second artistic partner Yoko Ono.

Remarkably, for one of the world’s most legendary all time rock icons, Lennon’s damaged soul meant that he had an inferiority complex about his voice. This artistic insecurity worked its way into the final production of Double Fantasy where he double tracked his voice and hid it a little under the mix. What this did was not only cause the content of Double Fantasy to seem a little sentimental but also its sound. What Yoko has done with this new remix is to give Lennon back his genius and indeed that soul searching pain that energised the core of Plastic Ono’s Band’s primal scream. I’m Losing You in this new incarnation would have sat perfectly on Plastic Ono Band or Walls and Bridges. The feature of this new version is the power of John Lennon’s rock n roll voice, even on the Yoko Ono songs; it is a wonderful new revelation!

Once I had reconsidered the record’s sound I then got to thinking about reassessing the message. Yes, this is a love album and maybe after the first three years of The Beatles we had left that to Paul McCartney. However, Lennon and Ono were not just speaking about their own often turbulent marriage. Lennon re-emerged from the Dakota building on New York’s 72nd Street after five years as a house husband and father looking to set his new work in the context of the times. If Lennon had watched, via television, those sixties’ dreams turning to seventies’ nightmares then he was again hopeful of firing new dreams for the eighties, hence Starting Over. Clean Up Time was not just a testimony about the Lennon’s it was a call to all those sixties’ dreamers. Watching The Wheels was a challenge to the priorities of a generation who had gotten older and become spouses and parents if they had failed to grow up in the process. Thus Beautiful Boy (Darling Boy) with some of Lennon’s smartest couplets – “Life is what happens to you when you’re busy making other plans” – and Woman, in which he leaves behind the sexist abuse of the “Girl” from 1965’s Rubber Soul and reconsiders the role of the women in his life, are both songs of objectivity as well as subjectivity.

Some might still say that Yoko Ono’s seven songs dilute the impact of the album. I can understand that critique but I would add that these are without doubt Ono’s most accessible tunes, Kiss Kiss Kiss is as good as any Blondie song of the time and Every Man Has A Woman Who Loves Him is again recreated here with Lennon’s voice alongside his wife’s and the closing Hard Times Are Over also finds Lennon getting his spoke in. Everything benefits as a result and in the end I think the strength of the album is that they alternate songs and don’t do two batches of songs unconnected.

Of all the Remasters released in this 70th Anniversary of his birth blitz this is the most interesting and worth buying. All the other albums have already had their remix with extra tracks eight years ago. Double Fantasy Stripped Down gives a whole new package and even comes with Sean Ono Lennon pencil sketches of the original cover. Love, romance and the ebbs and flows that come with it take up the vast majority of the thinking and doing of our adult lives. It would seem the perfect subject for a spokesman of any generation to do a study in. Double Fantasy with its mixture of honest struggle and sentimental hopefulness is a pretty good study indeed; even better in this new mix!

My life has no purpose, no direction, no aim, no meaning, and yet I'm happy. I can't figure it out. What am I doing right?"

Serious fan of the website, lots of your articles have truly helped me out. Awaiting up-dates!