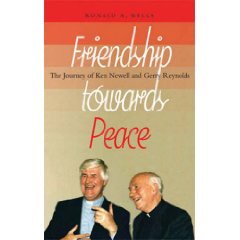 Reading Ronald Wells’ account of two of Northern Ireland’s greatest peace makers Rev. Ken Newell and Fr Gerry Reynolds is an inspiring and in many places challenging book. These two men, rooted in their different traditions that have been at logger heads in Northern Ireland society since its inception in 1921, becoming friends was visionary and incredibly courageous in a society that speedily dismisses the critique of anyone in their own community as betrayal.  Wells catalogues with an academic researchers detail the friendship of Newell and Reynolds as well as the developing cross community relationships of the Clonard-Fitzroy Fellowship, from both of their Churches, and also the other contributions they made from their pulpits, within their denominations and the wider political and social issues of Northern Ireland.

The great dismissal of reconciliation as a theological or discipleship issue in Northern Ireland by Presbyterian ministers, is an astounding neglect of their Reformed and Biblical heritage, and without doubt comes from a deep insecurity in identity and indeed the theology that the dismissers often shout so loudly about. Wells records Newell’s belief that theology is merely an excuse to not have to deal with inbred sectarianism or count the cost of what it would really mean to follow Jesus.

The personal challenge for me was that I used to be publicly courageous about these very issues but in recent years I have been a little hesitant. Back in the early eighties I was a naive young preacher who used to preach on Chronicles 7 v 14 which was used by many of my fellow evangelical Protestants to call the people of God to pray for the healing of the nation. Somehow, missing from the declaration was the repenting of our own sinful contribution to the violently divided society in Northern Ireland. A call to prayer without the rest of the verse was an incredible neglect of the Scripture. I also remember when the Anglo Irish Agreement was signed in 1984 and the Protestant town councils put up Ulster Says No banners seemingly everywhere I was asking in sermons if we felt that there was a union jack draped over the throne of God with an Ulster Says No banner hanging over the gates of heaven! I remember my parents coming to one such sermon and leaving quickly and asking that I tell them what I would be preaching about before they came again!

I also remember Ken Newell, having read my first poetry book, which had a good few poems about Northern Ireland, warning me that with such thoughts I would find myself in a wilderness but to hang in and after ten years the Church would listen to me again! I had no idea what he meant but within a few months I did and I think that losing the support of the more conservative end of my denomination caused me to have less confidence to speak out publicly. Even as a Chaplain I have certainly made my thoughts known in conversation but probably have rarely in my Sunday night teaching been as clear and courageous as I was back in 1984, probably aware that my students go home to ministers with more intransigent views and I was not brave enough to publicly oppose them.

This week as I read Friendship Towards Peace I have felt the Holy Spirit’s conviction and vision reignited in my depth of soul. This is perhaps the biggest priority in revealing the power of the cross and resurrection of Jesus in my society in my generation. I have been slow to speak out and even slower to build the friendships that Ken and Gerry have modelled. I thank God that He against my own strategies brought Fr Gary Toman into my life as a colleague in Chaplaincy.  Gary and I have taught each other (he much more than me!) how to respect each other’s differences and yet encourage each other to love and follow our Lord more. For us, we are not involved in some great Satanic conspiracy to make all Northern Ireland Presbyterians loyal servants of Pope Benedict! Indeed, we would probably have made each other much more convinced of our different backgrounds than when we started. At times I see Gary smirk at what he perceives as the chaos of Protestant democracy and I being a contrary wee Ballymena man could never handle a Magesterium telling me what to believe! Our friendship does not benefit from denying our differences but is enriched by acknowledging them and attempting to understand them in the love and grace of the deep fondness of friendship.

Having read about the vision and courage of Newell and Reynolds over the last thirty years I am energised to seek to be a peacemaker and thus a child of God, as Jesus called them. We can thank God that the awful years of death and destruction that Wells’ book records Ken and Gerry leading us through have given way to more peaceful society and we can also thank God for their contribution to that very peace that we now enjoy. However, it will take much longer and will need a whole lot more Newells and Reynolds if we are to kill off the deep seated bigotry and sectarianism that still divides us. Please God lead me to play a fuller part in the bringing of your Kingdom in Northern Ireland as it is in heaven.

Posted at 11:33 AM in BOOK REVIEWS, PEACE AND RECONCILIATION | Permalink | Comments (5)

I actually think that secularism has taken the lead over the last few decades in breaking down the barriers between Protestant and Catholic in N.I. That's not a bad thing in itself, but it should have been people of faith taking this lead.

Protestants and Catholics are studying together, working together, playing sport together - but praying together? Going to an occasional mass service to see which bits you agree or disagree with? Admitting that the Holy Spirit might in some way be at work inside the Roman church? No thanks. (I think I'm busy that day).

I think a lot of Christians do say "I'm not sectarian - I've got nothing against Catholics". Hmmm - no, but we do expect them to leave their church and convert to Evangelical Protestantism before we'll consider recognising them as a brother in Christ...

We say that real Christianity has nothing to do with the church you belong to, or whether you're a Catholic or Protestant. And the world at large doesn't believe us, because they're not seeing the evidence.

It's always interesting to be a misfit (or perhaps a prophet). May you always have he courage to stand up for the kingdom of God, whatever the personal or professional cost it may bring with it.

Are you familiar with this new film? http://www.ifcfilms.com/videos/five-minutes-of-heaven-trailer

Is there no way of clicking to say I like this, the way we can on facebook?

Thanks for the review, on my to buy list. The subject of Peace Building/ Making does seem to losing ground within the P.C.I, the recent decision of the church of not continuing with its Peace Program would be an example, the staff who were employed were involved in excellent work. Therefore, there is an even greater need for people in your position to continue speaking out on this important subject. Any good gigs coming up in your place?.