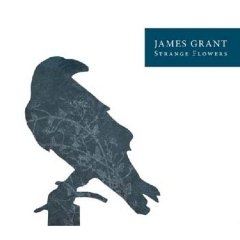 I have waxed lyrical about James Grant before. He is one of the many maturing Glaswegian songwriters who are the legacy of that golden time when Glasgow was centre of the British music scene and Scottish at the tail end of the eighties, before Manchester shifted emphasis from song craft to baggy trousers that eventually led us into to the abyss of Oasis. While the Gallagher boys have blatantly plagiarised The Beatles sound, emptying them of anything worth pondering about, the flotsam of those Glasgow days (Ricky Ross from Deacon Blue, Steven Lindsay from The Big Dish, Justin Currie from Del Amitri et al) release mature records that go relatively unnoticed. This is Grant’s first release since 2005’s Holy Love and might just stand as the best release by the class entire of Cut magazine (remember it – glory days!) to date.

Grant’s deep throated croon gives his work the sound of weight and importance. He uses a lot of religious words too; holy, hallowed, belief, faith and sin are sprinkled liberally across his text. This usage is no preacher’s Creedal Confession but it reveals Grant’s intention that his art should be involved with what is lying underneath. This is soul music of a literary kind; there is hope in the dark, sacred in the mundane. Grant is not a million miles from a Glaswegian Van Morrison.

Strange Flowers is Grant’s most accessible album since Love and Money’s Strange Kind Of Love with enough Dogs In The Traffic to keep me happy! After Holy Love’s sparseness we find a fuller sound here. From the chirpy strings of the opening This Could Be The Day everything is much more accessible. The jauntiness of Lake Louise makes it the most single sounding thing since those distant Love and Money days and Beat The Music the most funky. Monica Queen and Karen Matheson’s harmonies are another delicious feature throughout but particularly on the title track and the gorgeous Hallowing Ground. Perhaps most extraordinary of all is the nine minute epic, My Father’s Coat, with its gentle catchy early riff and then the Neil Youngesque guitar solo that it soars out to, never mind the amazing harmonica atmospherics.

I was searching like this site since 3 month now I am very happy and Excited, There are many important information's about JAMES GRANT...

Just wondering, if i can use this information for my research paper's project. However, i admire the way you present your words ... Thank u anywys..

Through the earth, and that is love is the treasure!

I am entirely attracted by the good stuff.Happy to sharing the great blog with you.Good luck to you.

I wore the Continuity Bra to race in also it do it is job, staying on, even in each of the outrageous surf! I also severely liked the Swirl shorts, Taylor wrap & certainly the glasses! I examined out the brand new Underspin in polarized, the Daisy Chain and I raced from the Radar straight Stem. looking forward to acquiring back again to Kona and placing the sleep of instruction .fake Oakleys collection to use! Jenny

Oakley athletes, Shaun whitened and Rory McIlroy teamed as appreciably as movement image a 50th Anniversary neighborhood provider announcement for Stfake oakleys . Jude Childrens evaluation Hospital. Although the two come about from worlds apart, the two males allow it to be considered a priority to help companies like St. Jude, which help gives about near to their hearts.If Iam steering to hold out something like that, I want it to turn out to be with kids