U2: MAGNIFICENT - NO LINE ON THE HORIZON song by song 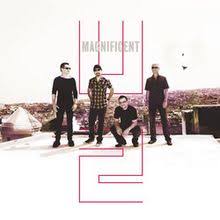 About two weeks before the release of No Line On The Horizon local rock journalist Stuart Baillie sidled up to me at an event in his Belfast Music Hub, the Oh Yeah building, and told me he had just heard the album. As his review in Belfast’s music magazine Alternative Ulster states he was impressed and, as he was talking to me, he made emphasis of the fact that there were a couple of good Psalms on there – “as usual,” he added.

The most Psalmic of those Psalms is no doubt Magnificent which when I first heard it did not have me thinking Bach’s Magnificat canticle, that the band said influenced it, but more the new modern worship phenomena. Indeed when I played it between the songs of Delirious? and Tim Hughes at a recent Queen's University Chaplaincy event it didn’t feel out of place.

Now those who know my misgivings about that modern worship scene must wonder why I don’t question U2 when they encroach into such territory. Well, my answer is in words like authentic, vulnerable, doubting, hurt; human! One of my biggest problems, with the modern worship scene is that “God is on his throne so all is right with the world.” Much as I don’t doubt the theology of God in that statement, a look around my life, my family life, my community life, never mind the world news that beams into my home suggests that all is not right. I guess it was summed up in that by now ancient line from an eighties worship song, “In his presence my problems disappear.” The hymn writer kiddeth not me!

Yet, that has been a characteristic of most modern worship. It is uncomfortable to find yourself in worship services where everyone has arms raised, eyes closed in ecstatic bliss while your heart has been broken, you just lost your job or a loved one lies dying in hospital or has just been buried. Though we might see why the writer, worship leader, is conjuring an other-worldiness it never seems Biblical to “leave all our troubles at the door and come into worship.”

Magnificent is unapologetic in its desire to worship God. Indeed, in almost Calvinistic theology, Bono declares that he was born to sing such songs. Personally, I am not so sure that Bono is confessing a belief in predestination so much as declaring his vocational mandate. This is what he was made to do. When those in the Shalom Fellowship, the band belonged to in the early eighties, attempted to have the band break up and go and do something more useful how wrong could they have gotten it! Imagine a world without U2 albums, their Christian input into the contemporary conversation or Bono’s advocacy for the world’s poor and marginalised. Whoever had “the picture from God” that these last thirty years should not have happened need to hear the conviction and belief in Bono’s voice.

Bono’s conviction and belief though is never without the self awareness of doubts within and the pain that impinges from outside. Bono confesses his own cluelessness that goes hand in hand with his belief that God is directing him. The chorus then talks about love leaving its painful mark and the same love being the only thing that can heal that scar. It could be surmised that this is a chorus left over from his father’s passing away or perhaps other painful family issues. Sent to me on Facebook at the time of a very serious illness in our family this chorus brought deep catharsis and hopefulness.

“Justified til I die” is another heavy theological term sneaked into a rock lyric. As Wikipedia puts it, “In Christian theology, justification is God's act of declaring or making a sinner righteous before God. It is again all about what God has done in spite of the cluelessness or our own human condition. It is a declaration of the Good News. It is good reason to magnify.

Magnificent would seem to be a word used for God. Again, this is what drew me to the possibility of the influence of modern worship songs which tend to use adjectives as words for God; Glorious being a recent favourite. U2 will be well aware of the worship industry for at least a couple of reasons. Eoghan Heaslip, son of Jack Heaslip, the band's spiritual adviser until his death in 2015, is a worship leader with a few albums under his belt. In the years leading up to Line On The Horizon, Bono had struck up a friendship with Contemporary Christian music star Michael W Smith who has dipped into the worship genre.

U2 have written hymns since their second album October was declared a worship album by no other than Christian despising Hot Press magazine but nothing as blatant as Magnificent. Could it be sung in Church? Maybe? Will it be dragged into some U2-charist (U2 Eucharist) somewhere; bet your life on it. Much more interesting for me is how this will be placed and performed on the next U2 tour this summer. That will probably be its most magnificent moment.

People will also like the romantic love. Still we often ask ourselves what on earth love is?